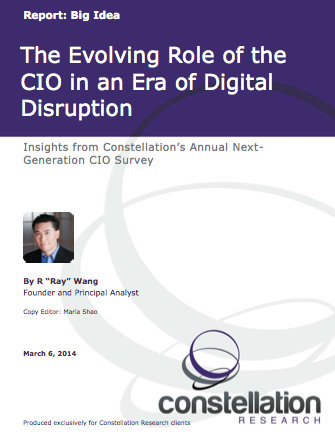 Constellation shares with its clients the fourth annual survey of CIOs. The 2014 survey included interviews with 119 respondents about their priorities by persona. Survey results showed that while CIOs prefer to spend more time on innovation projects, most CIOs must spend their time battling to achieve reduction of cost in IT delivery. In the shift toward dominating digital disruption, CIOs can only move as fast as their organization's DNA will allow while driving transformation. Using Constellation's organizational DNA framework, CIOs can understand how much change they can expect their organization to consume and they can gauge their ability to affect the thought process and culture.

In the meantime, expect a chief digital officer role to emerge that may include the personas of the Chief Innovation Officer and the Chief Intelligence Officer. The emergence of the CDO is essential for the new age of digital business. Though the current debate often centers on whether the CIO or CMO will win out or whether chief digital officers may arise from an expanded role for the CIO, we see these arguments as shortsighted. The role will transcend both the CIO and CMO, as digital initiatives will require new skill sets.

The role of the chief information officer (CIO) continues to evolve as businesses are transformed by the adoption of digital technologies. This report delivers the results of the annual next-generation CIO survey conducted by Constellation Research. Survey results were gathered in the second half of 2013 and combined with findings from interviews and inquiries. The overall results were presented in early 2014.