In one sense, the TC22 reunion of the “data fam” was trip back in time, from the 1990s/2000s rock-and-pop-hit keynote soundtrack, to the return of the “Devs on Stage” and “IronViz” sessions, to the packed and playful “Data Village” opening night reception, complete with playground equipment and Elvis impersonators. It was also nostalgic seeing more than 5,000 people streaming into the Mandalay Bay Convention Center (about 1/3 of the event’s record attendance, but it felt like a TC, just like it used to be).

Outward appearances notwithstanding, Tableau executives acknowledged from the start of TC22 that it’s a time of change for Tableau -- and for BI and analytics more broadly. Much of the change for Tableau is related to its absorption into Salesforce, which acquired the company two-and-a-half years ago. Mind you, the Tableau name is absolutely NOT going away – it’s the analytics unit within Salesforce, just as Mulesoft has retained its identity and integration role since its acquisition by Salesforce. But the one-million-customer-strong Tableau community is definitely gaining closer ties with the 16-million-customer strong Salesforce Community.

CEO Mark Nelson said during his opening keynote that Tableau can now draw on Salesforce as “a superpower.” A concrete example was the announcement of a coming Model Builder feature for Tableau. The no-code predictive-modeling capability is based on Salesforce’s Einstein Discovery, and it will be integrated into Tableau by the end of 2022. 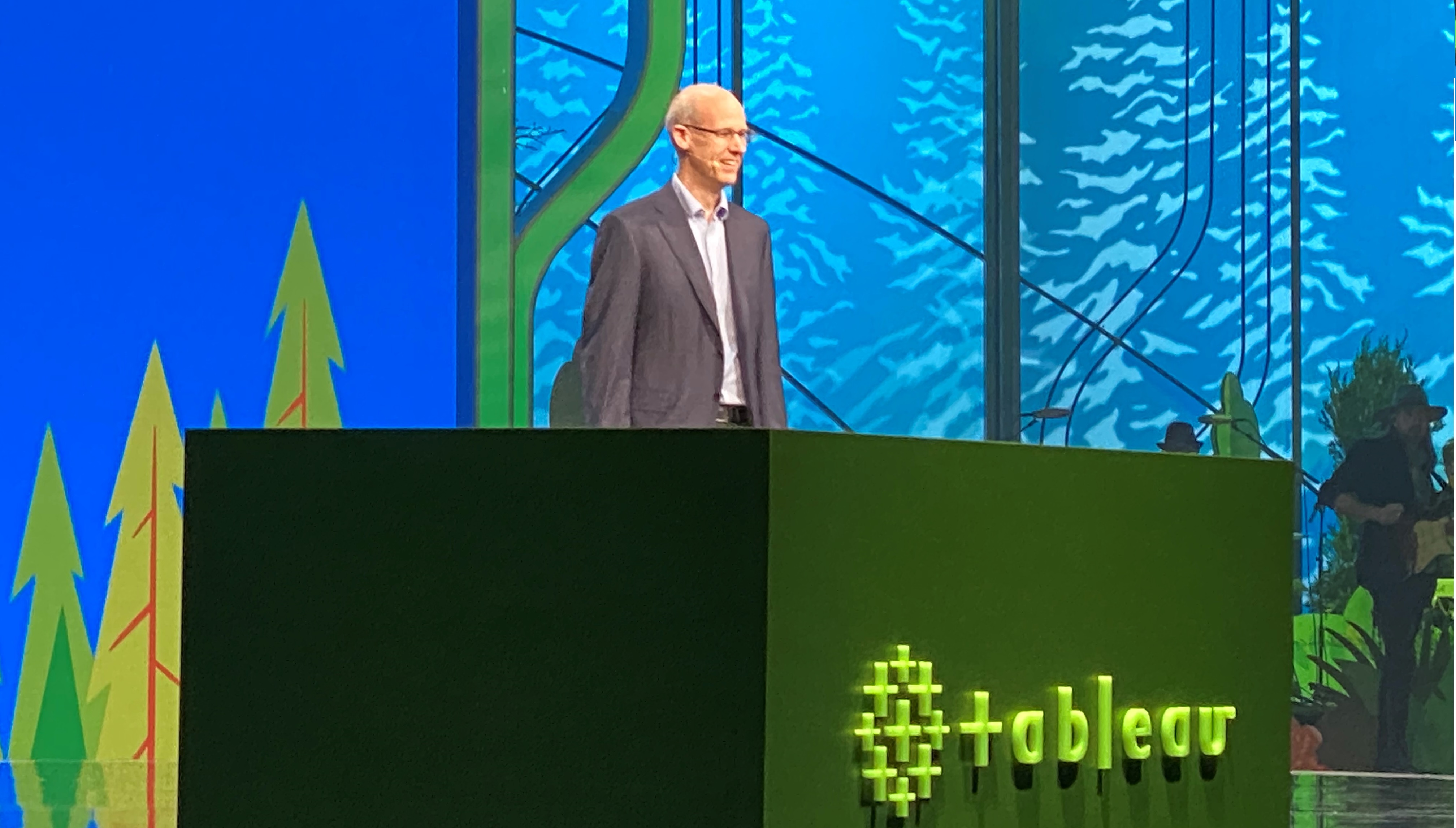 In his Tableau Conference keynote, CEO Mark Nelson says Tableau is drawing on Salesforce as a "superpower."

Another sign of Salesforce’s superpower influence and contributed strengths has been Tableau’s emphasis on adding enterprise capabilities since the acquisition. At TC21, held virtually in November, enterprise-oriented announcements included a Centralized Row-Level Security feature and a Connected Applications feature. That latter enables administrators to set up trusted relationships with external services.

The enterprise push continued at TC22 with the introduction of Advanced Management capabilities, including Customer-Managed Encryption Keys, an Activity Log feature that tracks how individuals are using Tableau, and an Admin Insights feature that uses Tableau analyses to help admins track dataset usage, license adoption, and visualization load times.

What’s in a Name

Some TC announcements seemed more about branding than dramatically new capabilities (a Salesforce influence?), but sometimes it’s important to get names right. For example, the company announced the rebranding of Tableau Online as Tableau Cloud -- in line with Salesforce naming conventions. The name change is justified in that 70% of Tableau customers now deploy first (and often only) in the cloud. So it’s not about taking the Tableau experience “online,” the roots of the old name; it’s about delivering a cloud-first Tableau. That evolution will certainly require more than the cloud-centric accelerators that were added to the Tableau Exchange as part of the Tableau Cloud unveiling. For example, I’m hoping Tableau Cloud will soon take advantage of the Salesforce superpower known as Hyperforce, which would give it the ability to run with consistency across multiple public clouds. Tableau execs say support for Hyperforce is on the roadmap, but target release dates have yet to be announced.

Another brand change was the unveiling of CRM Analytics, which is the new name for what was previously called Tableau CRM (and before that Einstein Analytics and before that Wave Analytics). The change to CRM Analytics was actually announced in April, but the move was explained more deeply to analysts at the Tableau Conference. The new name was greeted by customers with a “sigh of relief,” according to one executive, because the product has always been a part of Salesforce and was not developed by Tableau. The naming helps make it super clear that you choose CRM Analytics when you want to bring insights and predictive guidance into sales and service rep Salesforce workflows.

Increasingly, CRM Analytics will be available through even more targeted applications, such as the Revenue Intelligence application, introduced in February, and through five industry-focused versions of Revenue Intelligence – for the Salesforce Financial Services, Manufacturing, Consumer Goods, Communications, and Energy and Utilities clouds – set to be released this summer.

Despite all the talk of dashboards being dead – talk mostly heard at Tableau-rival events – it was clear from the armies of analysts at TC22 and the rowdy throng at the IronViz competition that data visualizations and drillable dashboards are still very much in demand (something natural-language-search-centric vendor ThoughtSpot acknowledged at its May 9-12 Beyond event, which I also attended.)

The whole self-service movement came about because organizations wanted to make it easier to create pre-defined views of business conditions without having to wait in line for IT to create new reports. All the better that visualization centric dashboards also supported lower-latency monitoring and drill-down analysis, unlike the static reports that they often replaced.

To promote easier consumption by a broad base of business users, Tableau introduced a Data Orientation Pane feature that drew big applause during the popular “Devs On Stage” session. The purpose of the pane is to guide new and novice users in the use of a dashboard by providing descriptions, links to resources (such as how-to-use videos), list of data sources, and details on which fields are being used, which filters are in effect, and what outliers might indicate.

Seeing Tableau With a Beginner's Mindset

In another sign of change afoot at Tableau, there were presentations on new initiatives led by new executives who are taking a look at Tableau offerings with a beginner’s mindset. For example, a Data Fabric initiative led by Amazon/AWS veteran Volker Metten, now a Tableau VP, Product Management, is aimed at better aligning capabilities including Tableau Prep, Tableau Catalog, Virtual Connections, Row-Level Security and Governance Rules. The goal is to ease data access and data usage while ensuring that the right data gets to the right people.

Another initiative led by Metten is working toward greater consistency and interoperability among Tableau products and capabilities that have matured at different rates. Tableau Prep, for example, currently has one version for Tableau Server and a slightly different version for Tableau Cloud, so the company plans to align the two. The team also wants to ensure that Prep will be able to draw data from Salesforce and publish transformed data directly into CRM Analytics – a capability expected to be available before the end of this year. 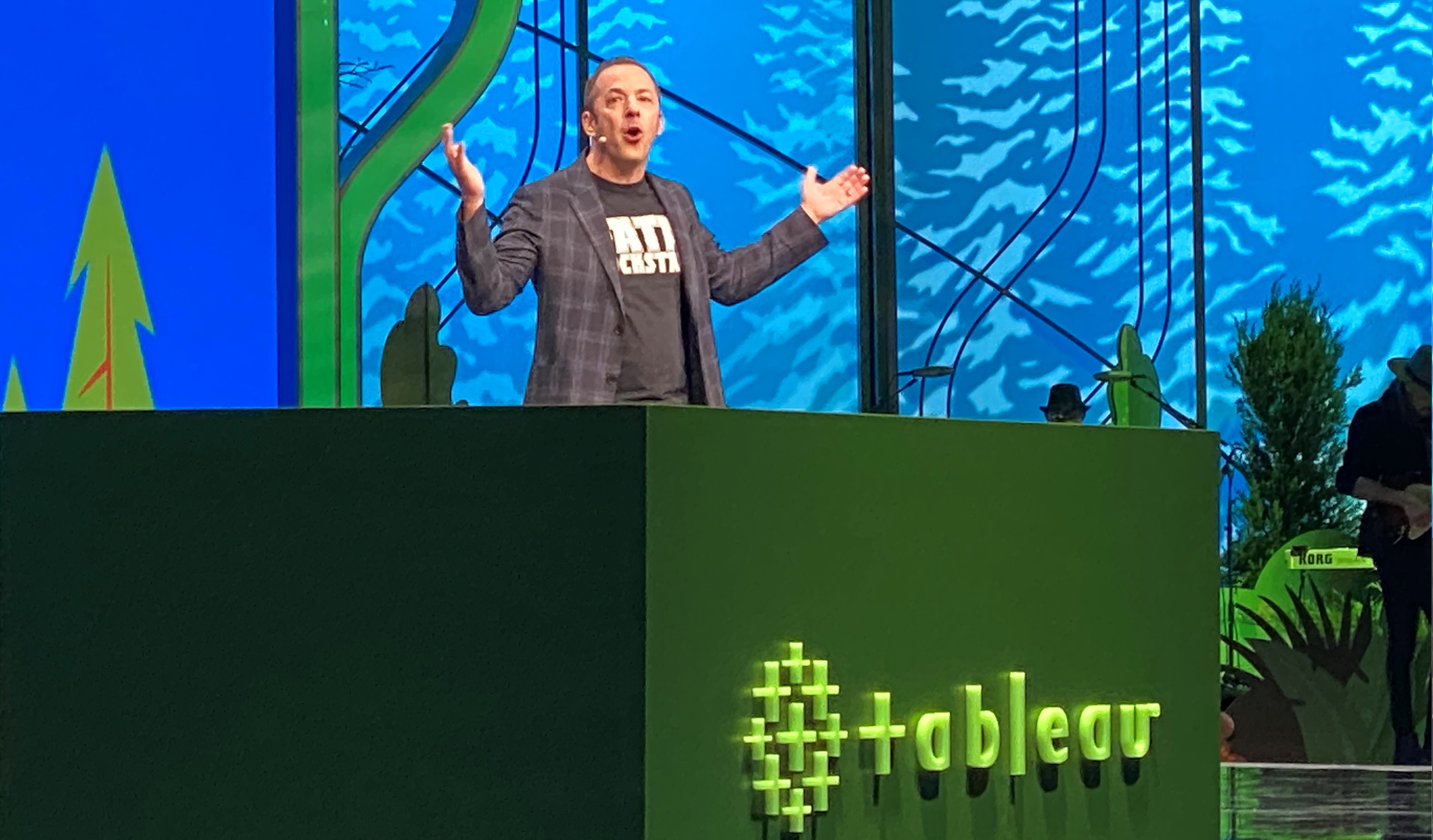 As for changes within the larger BI/analytics market, there’s big push today for what’s variously called “actionable analytics” or “actionable insights.” As I’ve often observed in my research and on social media, the problem that Tableau helped to solve 15 years ago was that of having too much data and not enough insight. Now that self-service capabilities are pervasive, the challenge is often having too many insights, sometimes conflicting insights, and not enough clarity on what actions to take.

At TC22, the announcements geared to improving and clarifying insight included the Data Orientation Pane and new “Data Stories” automated plain-language explanations. This natural-language-explanation capability, based on the Narrative Science acquisition, will be showing up within Tableau as well as within Salesforce applications, bringing insight closer to the action. The coming Model Builder feature for Tableau will go even further to move the needle toward predictions and recommended actions.

These examples are clearly just a start on a journey that will bring more change. As long-time Tableau Chief Product Officer Francois Ajenstat told analysts at TC22, Tableau has gone through “many, many” changes since its founding in 2003 and its initial public offering in 2013. Most notably, there was an executive leadership change when Tableau’s stock slumped in 2016 (due largely to the introduction of Microsoft Power BI), yet Tableau managed to reach new heights.

At TC22 we saw a company that is benefitting from the marketing muscle, extensive tech talent, and intellectual property portfolio of its new corporate parent. And because there is new blood and open discussion and exploration of BI/analytics market changes by Tableau executives, I think we also saw a company that is embracing change rather than clinging to the glory days of the self-service era.

analytics, #DataScience, business intelligence
Stay up to date with the latest disruptive technology.