Salesforce promises artificial intelligence applications that ‘just work’ out of the box. It’s a contrast to public cloud AI offerings and a lesson learned from Salesforce Wave.

There aren’t enough data scientists in the world to go around, so Salesforce is counting on automation and an apps-centric approach to bring its Einstein artificial intelligence capabilities to the masses.

At last week’s Salesforce Analyst Summit in San Francisco, company executives shared details of the company’s two-plus-year effort to build a highly automated data management and machine learning pipeline to deliver predictions and recommendations at scale. The work started with Exact Target predictive customer journeys, and many (though not all) Salesforce AI acquisitions are being plugged into the same automated pipeline. The system can scale, said company executives, because all data collection, data prep, feature selection, model building, hyper-parameter tuning and scoring is handled automatically.

“One of our pilot customers flipped the switch [on Einstein Predictive Lead Scoring] and got a 25 percent lift in sales,” said John Ball, senior VP and general manager of Einstein and a KXEN veteran that Salesforce hired for his experience with automated analytics.

The goal with Einstein apps is to help people focus on what matters. Predictive Lead Scoring, for example, helps salespeople focus on the most promising leads. Opportunity Insights, another Sales Cloud Einstein App due out in February, helps salespeople set next priorities. For those still short of their quotas, that will mean spotting the next deals most likely to close; those who have made their quotas can turn to nurturing their pipelines.

Einstein apps won’t be a fit for every company. For starters, it takes lots of data to drive automated, machine-learning-based predictions. If you are dealing with fewer than 100 leads per month, humans can handle the load and they probably have a good sense of which leads to prioritize. It’s when data volumes are overwhelming that Einstein apps will make sense, said Ball.

That’s not to say that Einstein is geared only to big companies. Data volumes depend on the application. Many small marketing teams, for example, send out millions of emails per month. So Predictive Scoring & Audiences and Automated Send-Time Optimization, two apps coming to the Marketing Cloud this year, might make sense even for small companies, so long as they are marketing at scale.

For now, Salesforce is picking and choosing straightforward Einstein apps that will “just work out of the box,” said Ball. But over time the company plans to get to more sophisticated apps that might require a bit of consulting and business process change to deploy. There are also plans to support custom Einstein apps, but here, too, Salesforce said the capability will be a point-and-click affair for developer types without need of data science talent. 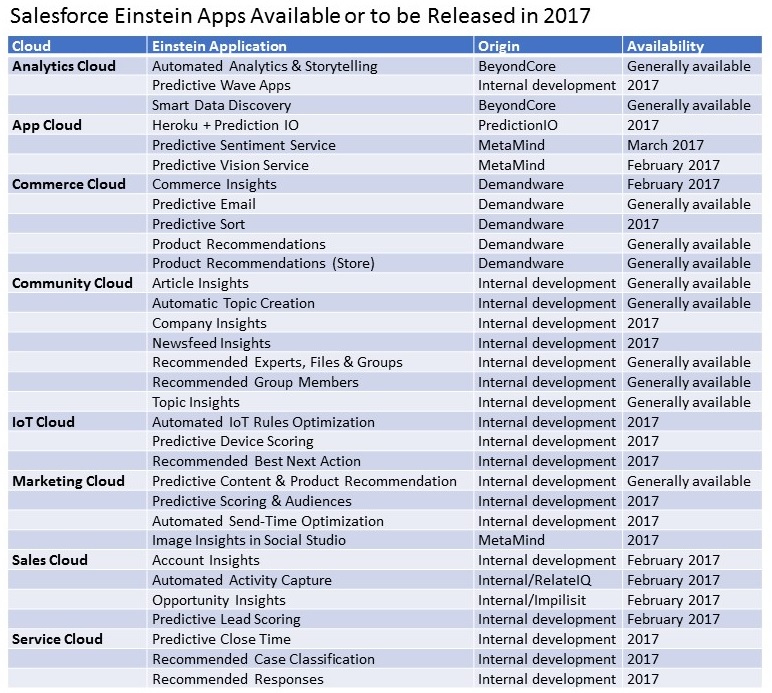 Until more sophisticated apps or custom app capabilities show up, Salesforce offers the ad hoc analysis and recommendation capabilities of Analytics Cloud Einstein Smart Data Discovery, which is powered by BeyondCore, acquired in September.  This separate machine-learning-based engine lets you load and explore data sets from Salesforce, relational databases or Hadoop and answer four questions: What happened? Why did it happen? What will happen? And how can I improve?

The answers to these four questions, which are descriptive, diagnostic, predictive and prescriptive analytics, respectively, are delivered in the form of text-based “stories” that can be exported as Word documents or PowerPoint presentations. You can also generate supporting data visualizations through the Salesforce Analytics Cloud Wave engine.

My Take on Einstein’s Progress and Competition

Salesforce is taking an apps-first approach in part due to lessons learned from the failed initial launch of the Analytics Cloud in late 2014. As I wrote last year, the first iteration of Wave was too expensive, too enterprise focused and packaged too much like a traditional BI platform. Last year’s reboot emphasized ready-to-run Sales Wave and Service Wave apps designed to work out of the box.

Rather than introducing an “AI Cloud,” as in the original Wave approach, Einstein is a capability that’s built into the Salesforce platform. Wave analytics capabilities are also built into the platform, but the original Analytics Cloud packaging and pricing approach, with platform fees and expensive builder licenses aimed at developers, just didn’t work. With Einstein, Salesforce is starting with the apps and adding custom capabilities for developers later.

The big and crucial question outstanding about Einstein is just how much are these apps going to cost? Salesforce execs are still vague about that, saying that some capabilities will be free while most apps will involve per-user/per-month or per-prediction fees. In the case of Einstein apps that were acquired, notably those from BeyondCore and Demandware (now the Commerce Cloud), pricing is said to be in line with what existing customers were paying.

Public cloud vendors Amazon and Microsoft have taken services library approaches to AI, leaving it to developers to bring together machine learning, natural language processing, machine vision, sentiment analysis and other services together in finished applications. Templates, sample scripts and other content is available to guide the way, but they’re not ready-to-run applications. We expect Microsoft will do more to bring customer-experience specific services and, perhaps, something closer to finished AI apps into its Dynamics application portfolio.

IBM deserves credit for putting AI back on the map with its Watson Cognitive Computing push over the last five years. It now has a bifurcated strategy with IBM itself going after more sophisticated opportunities while also building out Watson platform cognitive services for a growing developer community.

IBM itself offers cognitive marketing solutions around campaign automation, marketing insights, real-time personalization, customer experience analytics, and customer journey analysis. Meanwhile, Watson developer partners, such as Influential, SocialFlow and Equals 3, offer Watson-powered cognitive marketing solutions. Whether from IBM or independent developers, these solutions are likely to require integration with systems of record. Salesforce, by contrast (and Oracle, when it releases its apps), is delivering ready-to-run AI applications that are extensions of its software-as-a-service applications. If Salesforce is your CRM system of record, Einstein will be the easiest and obvious first choice for adding AI.

salesforce
Stay up to date with the latest disruptive technology.