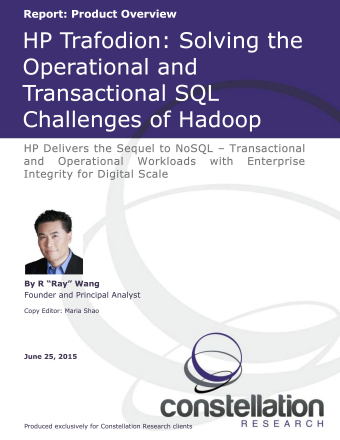 Launched as an open source project on June 10, 2014 and released commercially on January 29, 2015, Trafodion provides customers with an open source and commercial solution to address the limitations of HDFS/Hadoop and HBase in running transactions (OLTP - online transactional processing) and operational workloads at scale.

This initial open source project was sponsored by HP and incubated at HP Labs and HP-IT. Trafodion is licensed under the Apache License, Version 2.0. The software development is part of the IT Group and overall Big Data software effort within HP. Successful users of Trafodion gain a tool for enterprise-class transactional processing for the Hadoop world.

This vendor profile provides an overview of HP Trafodion and identifies key differentiators, product offerings, and a short list guide for buyers.