Salesforce streamlined Dreamforce 18 and put the emphasis on making the most of its extensive platform. Here’s how customers stand to benefit.

Salesforce has grown from a cloud CRM service into a massive platform with multiple sub-clouds and hundreds of discrete services. That’s one reason I found this year’s streamlined, less-is-more approach at Dreamforce 2018 to be a refreshing change.

When Salesforce CEO Marc Benioff said his (first ever?) sub-two-hour Dreamforce keynote would be “a celebration of you, the customer,” I was initially skeptical. The few big tech announcements -- Customer 360, Einstein Voice, Quip Slides -- seemed, well, incremental. Did they run out of big new tech challenges?

But as the individual cloud keynotes and more in-depth customer interviews commenced at Dreamforce 2018, it became clear to me that this event was about knitting together the myriad platform components and helping customers to combine and take advantage of the many capabilities. That’s probably why Customer 360 and the recent acquisition of API-integration vendor MuleSoft were the first topics discussed. It’s also why we’re seeing consolidation and blending of offerings, as in the example of Einstein and Einstein Analytics interfaces and packaging. 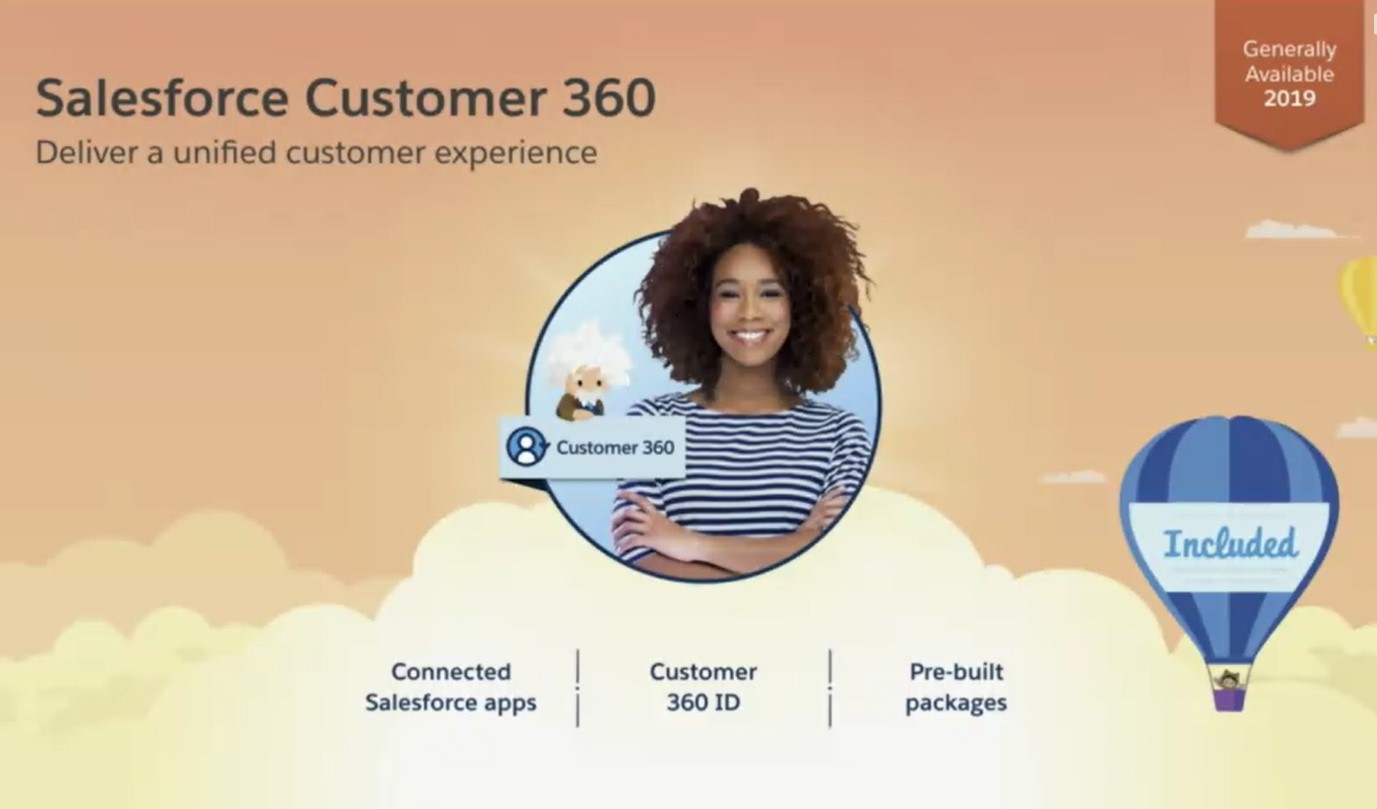 Customer 360 will provide a built-in (free) service that will resolve customer identities and ongoing changes across Salesforce clouds, but it won't be available until the second half of 2019.

Salesforce is not one platform today; it’s really a collection of multiple platforms, including the core Salesforce/Lightning platform plus Commerce Cloud, Marketing Cloud, Heroku and more. Customer 360 is an effort to make it easier to reconcile customer identities across the total Salesforce ecosystem. It’s not a data warehouse or master data management system and it won’t be moving or copying data. Rather it will be a hub-and-spoke set of microservices designed for identity resolution and change data capture.

The promise is that Salesforce users will be able to resolve and maintain accurate customer identities – across Salesforce and connected external systems -- even as customers change addresses, phone numbers, employers and married names. The bad news is that Customer 360 won’t be available until the second half of next year. The good news is that it will be an included, no-extra-cost part of the platform once it does arrive.

Dreamforce marked an introduction and coming out party of sorts for MuleSoft, the API integration vendor that Salesforce acquired four months ago. MuleSoft will remain an independent unit and brand that will continue to seek out and serve non-Salesforce customers, but the MuleSoft Anypoint Platform will also be the cornerstone of Salesforce Integration.

Salesforce and MuleSoft could not have asked for a better joint customer to join the Integration keynote than Jane Moran, CIO of Unilever. Given that the consumer-packaged-goods giant has more than 2,000 business apps, Moran quipped during the keynote that she’s more chief integration officer than chief information officer. MuleSoft’s Anypoint platform greatly speeds and simplifies integration, Moran said, because it creates a network of reusable API connections. The more integrations and components you create, the faster subsequent integration projects go as reusability drives a flywheel effect. Projects that used to take months or even years at Unilever can now be completed in weeks if not days, Moran said.

MyPOV on Customer 360 and MuleSoft: With its many acquisitions over the years, Salesforce has become a collection of platforms, and customers have increasingly struggled to resolve customer identities across Salesforce clouds (the Customer 360 role) and connect application functionality and data (the MuleSoft role). Thus, both of these moves were good choices if not overdue.

Unfortunately, Customer 360 is in pilot at this point. It’s said to be in testing with customer Crocs, but we’re told Customer 360 won’t be generally available until the second half of 2019.

Customer master data management and customer identity resolution technologies have been around for a long time, but what Salesforce is promising will be exposed right within CRM interfaces. This will give the front-line sales, service, marketing and other professionals who know customers and customer data best the ability to send update and correction requests directly to data stewards.

As for MuleSoft, Salesforce executives shared a clear roadmap on how they’re planning to better integrate MuleSoft with Salesforce while also maintaining the vendor’s stand-alone appeal to non-Salesforce customers. The key to making MuleSoft more accessible within Salesforce will be developing simplified interfaces for Salesforce admins who are not data-integration professionals. Salesforce user-interface developers are already working with MuleSoft to do just that.

Einstein Voice and Einstein Analytics Plus 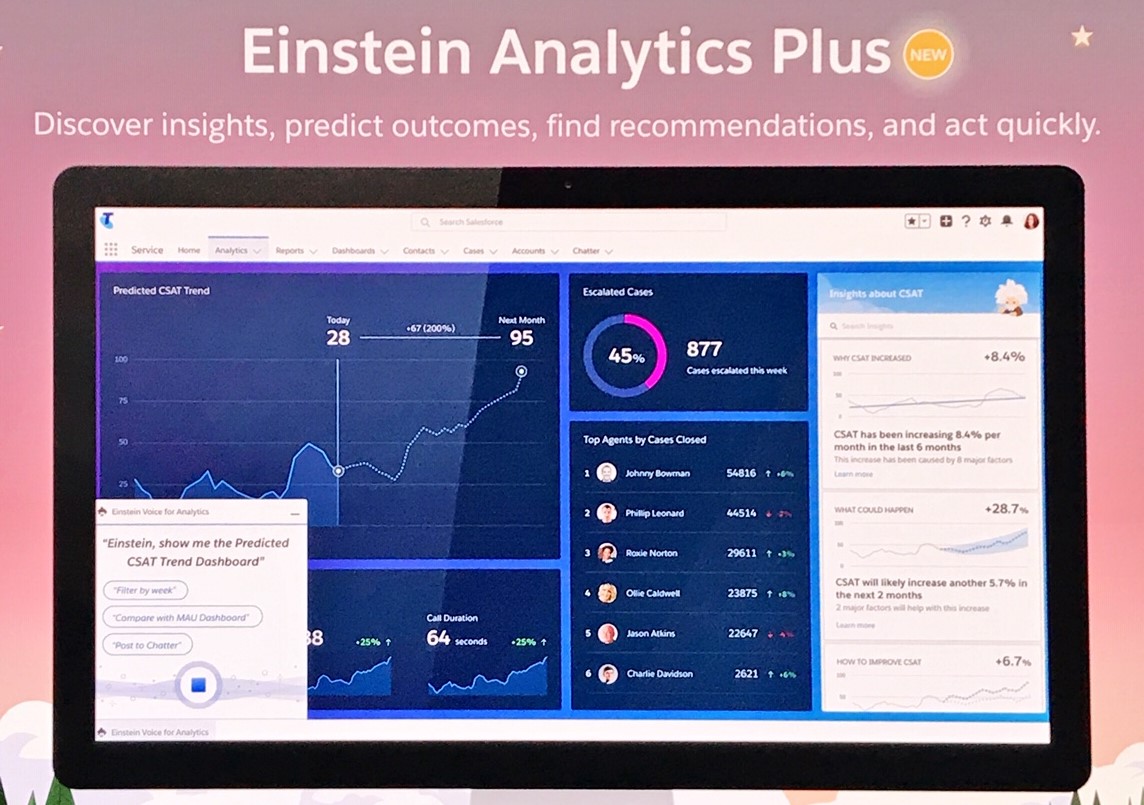 A new "Plus" offering blends the descriptive and diagnostic capabilities of Einstein Analytics with Einstein Discovery.

Natural language interaction has become the hallmark of many an AI application, so the Einstein Voice announcement was no surprise. Salesforce shared some pretty slick demos at Dreamforce, but this technology is still in pilot and won’t be generally available until June 2019 at the earliest. To recap, there will be two offerings with the following capabilities:

MyPOV on Einstein updates: Salesforce will initially use the speech-to-text capabilities native to Amazon, Apple and Google/Android phones and smart speakers at the front end of Einstein Voice interactions, but it’s also working on its own natural language processing capabilities. Identifying entities (people, companies, accounts, etc.) and deciphering the intent of questions and requests is the more challenging part handled by Einstein Voice. But when sensitive information such as account numbers might be involved, regulated institutions will demand a closed, Salesforce-only environment -- including the speech-to-text – without exposure to public services. 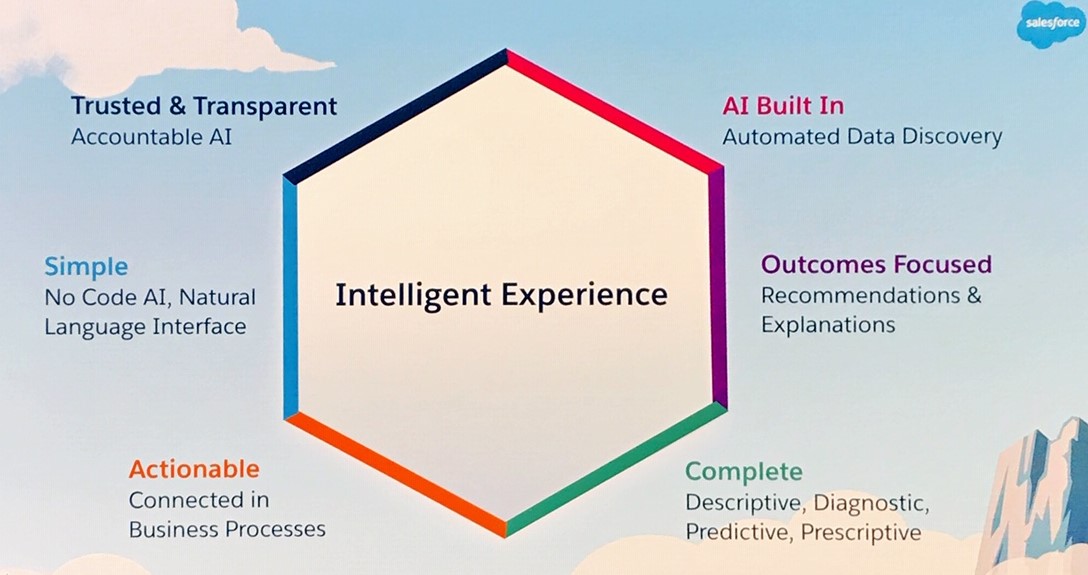 Salesforce sees analytics and predictions as embedded capabilities that should drive action within Salesforce CRM applications.

On the blending of Einstein Analytics and Discovery, this is a welcome step and I really liked the vision of a holistic, “intelligent experience” (shown above) that Salesforce presented. Salesforce isn't trying to sell Einstein Analytics to a handful of analysts who will build dashboards and reports for everybody else; it’s trying to deliver embedded analytics and smart capabilities to every CRM user.

The “Plus” discount for buying everything together will be welcome. Expense is always on customer minds and they have to show that they’re getting a return on their investment. With its emphasis on pre-built templates and educational opportunities during the Einstein Analytics keynote, Salesforce clearly understands that customers want fast time to value and evidence of adoption or subscriptions won’t be renewed or extended.

#DF18, @Saleforce
Stay up to date with the latest disruptive technology.