DataStax famously has its roots in the 2008 open source release of the Apache Cassandra “NoSQL” database, which itself brought global scale database capabilities to companies seeking to overcome the growing limitations of their traditional relational databases. Though founded two years later in 2010 to support enterprise customers, the company has increasingly become a key player in how businesses think about managing data in the cloud, as well as how they hedge the risk of lock-in with large commercial cloud vendors.

Cassandra itself, and therefore DataStax, is a Java-based product that makes for easy uptake and management in IT shops because most such organizations have Java skills, which remain widely available. At its heart, DataStax is aiming at companies that have the classic problem of coping with large scale data in the cloud, along with high geographic dispersion of said data. The Home Depot, for example, uses DataStax to connect its logistics, delivery, supply chain, customers, digital channels, and associates. With Cassandra and DataStax, the home improvement retail giant successfully launched curbside pickup quickly. Datastax’s key strength is in making distributed data straightforward and workable for any business. 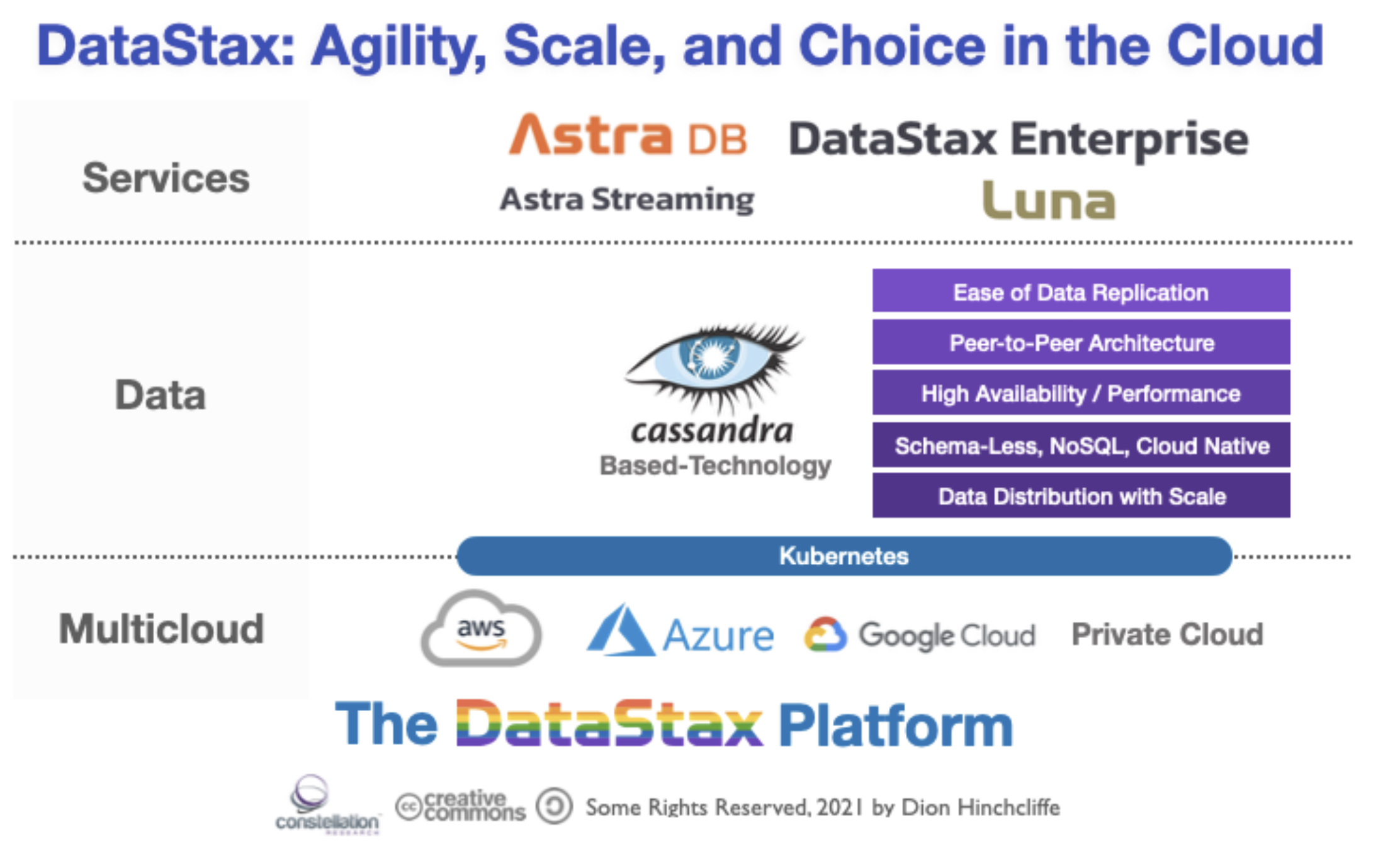 On its face, DataStax is to Cassandra what RedHat is to Linux:  A strategic offering that makes it easy to really bet on the product. The company  provides a multicloud-ready, serverless database-as-a-service named Astra DB so that organizations can just use it as a service with little to no provisioning. It also provides commercial support for Cassandra and an enterprise-optimized version for on premises deployments known as DataStax Enterprise.The company recently launched a new data streaming-as-a-service offering called Astra Streaming that’s built on Apache Pulsar to take advantage of that major trend as well. The offerings are fully cloud-native, run in Kubernetes, and they generally play quite well within an assembled modern cloud IT stack that IT needs now to be as future-ready and future-proof as possible.

Perhaps the single most important aspect to understand about DataStax is its vast ability to easily scale data either outside or within the confines of a large commercial cloud. The underlying technology, Cassandra, can easily handle Internet services the size of Facebook after all, which is where it originally came from. Organizations can build on and wield DataStax as their core operational database, assured that they can grow the largest business possible on it. And perhaps most significantly, all without being locked into Amazon Web Services (AWS), Azure, or Google Cloud various data storage offerings.

An Agile Cloud of Data for the Future

The digital world is still in its infancy and data growth is rapidly outpacing growth of compute speed, network speed, and storage. Managing truly vast amounts of data and feeding it through highly analytical and artificially intelligent systems to extract insights and value is becoming the top objective of just about every organization today and in coming years. Consequently, selecting the best database is a truly strategic decision today. The pernicious effects of forces like data gravity, which makes it harder to move from cloud to cloud as data volume increases, means the choice of the right database is crucial.

I’ve had a chance to talk with executives at DataStax over the last few weeks to understand their strategy and also so I can explain it to CIOs and other IT executives or digital teams. The company has its eye closely on where the industry is headed. They bring both true elasticity of database, high performance, cloud-native support, and the ability, when used appropriately, to substantially reduce the risks of data gravity and commercial cloud lock-in. DataStax also understands that the cloud is steadily moving towards models for radical ease-of-consumption, with serverless models for just about everything. The company also appreciates the painful lessons of the 1980s and 1990s, and that putting all the eggs of IT in one basket isn’t wise. This is core to their offering, and as is helping companies avoid the generation after that, where commercial SQL databases like Oracle and its near-predatory pricing also dominated. These are eras that most companies do not wish to return to as they migrate to the cloud. In short, my analysis is that DataStax is at present one of the clearest routes to ensure a move to the cloud doesn’t end up like these previous journeys.

Ultimately, DataStax provides the industry with a model for enterprise data that offers a high degree of both choice and sustainability agility for companies moving to the cloud. They enable CIOs to craft a best-of-breed IT multicloud-ready stack from the data on up that has genuine long-term legs with repeated proven capabilities within the Fortune 100. The company itself is healthy and growing. It recently received funding led by Goldman Sachs.

In the end, data is the only truly irreplaceable asset that organizations have, but it still tends to be underused and under leveraged in most organizations, in part due to over-reliance on schema-heavy, harder-to-access, and more difficult to consume traditional databases. Having a strategic cloud data capability that is both nimble, consumable, scalable, sustainable, and IaaS-neutral must be a key objective today for IT. Making the right choice unlocks the most value, helps achieve successful digital transformation, and increases innovation, while preserving the most flexibility and options among cloud vendors.