To attend a SAS Global Forum user conference is to be reminded of just how big a footprint the analytics giant has. This week’s event in Las Vegas attracted more than 5,000 thousand attendees, and to meet and talk to many of them was to understand that they’re not, for the most part, early adopters looking to pioneer new approaches. It’s an older and more well-established crowd than you see at your average tech event.

Their embrace of analytics notwithstanding, SAS customers tend to be cautious adopters, so I have to wonder how quickly they’ll take to the two big announcements made at #SASGF. The biggest announcement was SAS Viya, which is SAS’s next-generation architecture for running its software in private and public clouds. It’s a big advance over SAS’ previous cloud approach, which amounted to hosting and managed services. SAS Viya introduces microservices, REST APIs and even the option to use open languages including Python, Lua and Java.

Viya is set to become generally available in Q3 to be deployed using industry-standard technologies for Bare OS and cloud deployment. Cloud deployment and orchestration of SAS Viya will be achieved using Cloud Foundry, which will provide multi-cloud support for OpenStack, VMWare, Amazon Web services, Microsoft Azure, and other cloud infrastructure providers. Within the next month a SAS Viya preview will be available.

I’m not alone in sizing up SAS customers as mostly cautious adopters. A SAS data warehousing partner confided to me that many customers say “don’t mess with my code” when he suggests that they embrace in-database processing options introduced as early as 2007 and in-memory options introduced in 2012.

Of course, not every SAS customer is technologically conservative. I sat in on a nice presentation by Neil Chandler and Andy Wolfe of U.K.-based e-retailer Shop Direct, which stores its data in a Hadoop data lake. Apache Cassandra/DataStax is used to serve that data to a SAS stack running on Amazon Web Services. What’s more, the analytics are integrated with the retailer’s transactional environment so it can deliver contextually relevant, personalized content and offers to customers in real time as they shop online.

SAS Viya would have saved Shop Direct a lot of trouble, commented Andy Wolfe. But it wasn’t available when the company decided to run SAS on AWS two years ago. No doubt SAS customers who are fast followers will embrace Viya as a way to accelerate private- and public-cloud initiatives involving analytics. The architecture will insulate most of their users from having to deal with or think about third-party cloud tools.

SAS put a big emphasis on compatibility with existing SAS software when it designed Viya and when it talked about it at SAS Global Forum. The on-stage demos featured scenarios in which data and models were moved from on-premises SAS deployments up into Viya and results were returned back to the on-premises world.

So will the many cautious adopters be tempted to experiment with cloud compute scalability and new options coming with Viya such as the new machine learning suite (one of the bright spots in the announcement)? That partner I talked to said many SAS customers don’t change their ways until new CIOs or CMOs show up and demand at least experimentation with cloud deployment, big data platforms like Hadoop and open source analytics. In short, I’m guessing Customer Intelligence 360, the much more straight-forward SaaS offering, might see more robust adoption than SAS Viya over the next year or two. 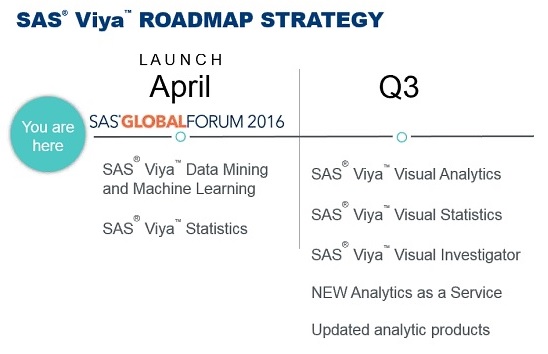 SAS Viya is a positive, if overdue, step that SAS needed to take. What’s not clear is the degree to which SAS will break from its traditional licensing and maintenance model. Analytics work tends to be spikey, so true cloud elasticity, where you can use and pay for the software only when you need it, is hugely attractive. A pay-as-you-go, analytics-as-a-service offering will be introduced along with SAS Viya, but from what I saw it will be a very limited offering – at least initially.

In my book, the as-a-service machine learning and analytics options being amassed by the likes of Amazon, Google and Microsoft (as well as those offered by partners on the same platforms) are the most significant threat to SAS in the long term. IBM, meanwhile, is porting its commercial analytics software to run on Apache Spark, offering cloud-delivery options and counting on an open source halo effect.

SAS Viya was clearly developed with existing SAS customers in mind, giving them an avenue to cloud scalability and performance. But I suspect that companies that are embracing new approaches will take a long, hard look at as-a-service options (including open source in the cloud) before making a significant, ongoing commitment to run SAS software in the cloud.

As for CI360, it’s another product that’s most attractive to existing SAS customers – namely those using SAS Customer Intelligence. In fact, the cloud app's promised ability to “unite data from all channels” presumes that you have SAS CI on-premises (or hosted) capturing information on customer behavior on traditional (non-digital) marketing channels. So I suspect the vast majority of uptake will be from existing SAS customers rather than from new customers using Customer Intelligence 360 in stand-alone fashion.

SAS, like IBM, Microsoft, Oracle, Teradata and other blue chip incumbents, has the luxury of a great big customer base, and in SAS’s case they’re mostly very happy and loyal. The trick will be reinventing the business enough to attract new customers without breaking the model of its existing business