One of the more interesting and vibrant new spaces in enterprise software in the last few years has been the category of Robotic Process Automation or RPA. The premise is simple and compelling: Show a software robot how a repetitive work task is done, and it will literally learn how to do it by watching the employee carry it out manually. The result is a rules-based algorithm that can then be adjusted, configured, optimized, and deployed quickly in the field to have that task carried out by the software robot going forward.

RPA can handle a wide variety of business use cases, from invoice matching to mortgage processing that previously required humans to do most of the work (though they still have to help with edge cases, but usually with greatly reduced workloads.) What's been interesting is that because RPA goes so deeply into exactly what a business does on the ground, inside its processes, RPA is often viewed more as a business tool than an IT tool. Thus IT has been surprisingly slow at times in introducing it to the business side, and businesses, not being in the IT field, are often unaware of the potent capabilities of this generation of much smarter process automation tools.

This state of affairs -- unclear ownership and tech unfamiliarity -- has led the RPA industry to flourish a bit less than it might otherwise have, yet still capture some of the most impressive growth stats in the enterprise IT industry

RPA also shows some of the best ROI of any new category of business apps. As the industry has matured and evolved, RPA has succeeded in having considerable real-world impact in the enterprise, with a growing wealth of case studies. While there are also some potentially concerning outcomes of adopting RPA, such as displacing workers at scale or the use of the technology by bad actors to engage in unwanted activities, so far negative outcomes appear rather limited.

The result is that RPA is one of the most practical and impactful applications of artificial intelligence (AI) so far. Yet the realities of making RPA operational quickly became apparent in the initial years, overcoming the overly-simplistic expectations of quick watch-run-deploy-optimize cycles.

End-to-End Intelligent Automation As a Platform

For RPA to sustain and adapt within a business it needs proper support. In other words, adequate design, planning and governance of an overall automation approach, while staying agile enough to quickly change with the business. So too is having a well-defined end-to-end technology framework to automate new processes. This includes integrating a host of related capabilities in an outcome-based sequence: Data capture, ingestion, and cleaning, data enrichment, automation output, quality control, downstream analytics, and exception handling, not to mention back-end features like system integration, autoscaling, capacity management, security, and compliance.

In fact, wouldn't it be nice if most of this was already assembled as a ready-to-go solution around a capable RPA engine so it could be quickly applied to the business? This is, in fact, where a good part of the RPA industry is currently headed, so that businesses don't have to bolt-on the inputs and the outputs to an RPA tool, and then layer on the necessary analytics, operations, management, and governance capabilities.

The AntWorks Platform: Beyond RPA

The above was the background to an recent trip to ANTENNA 2020, the yearly industry analyst confab organized by leading RPA vendor AntWorks, which is currently on my RPA ShortList of solutions in the space to watch. Taking place in mid-January, 2020 in Turks and Caicos, our hosts were the co-founders themselves, Asheesh Mehra, currently the Group CEO, and Govind Sandhu, who is the COO.

AntWorks as a company is an interesting story, and is on quite a respectable growth trajectory, with about 600 employees today, despite being founded in just 2015 in Singapore, where they remain headquartered. AntWorks is still regarded as the new kid on the block in RPA, however, even though their offerings consist of a more complete and encompassing platform than just that capability. Asheesh notes that this helps them win deals, because they're ready to go out of the box, with less system integration and cobbling together of different pieces to arrive at a solution. While you can use pieces of AntWorks if you already have other upstream or downstream components, it's the entire solution that works together where they shine, something I confirmed by talking with some of their customers at the event.

Asheesh and Govind did much of the presenting in the morning, and were good advocates for the company, laying out the key principles that AntWorks is driven by. One aspect clearly stood out during their presentations: Both founders are grounded in what they want to accomplish, have a crisp vision, and are very careful that fast growth doesn't derail where they are going. They are committed to this to the point that they told us that they still interview every hire they make for cultural fit, something that by now must be quite a burden. However, it will likely pay sustained dividends by laying a strong people foundation in what is -- like most mid-sized enterprise startups these days -- a far flung organization with many small, separate offices that make it hard to build a common identity. 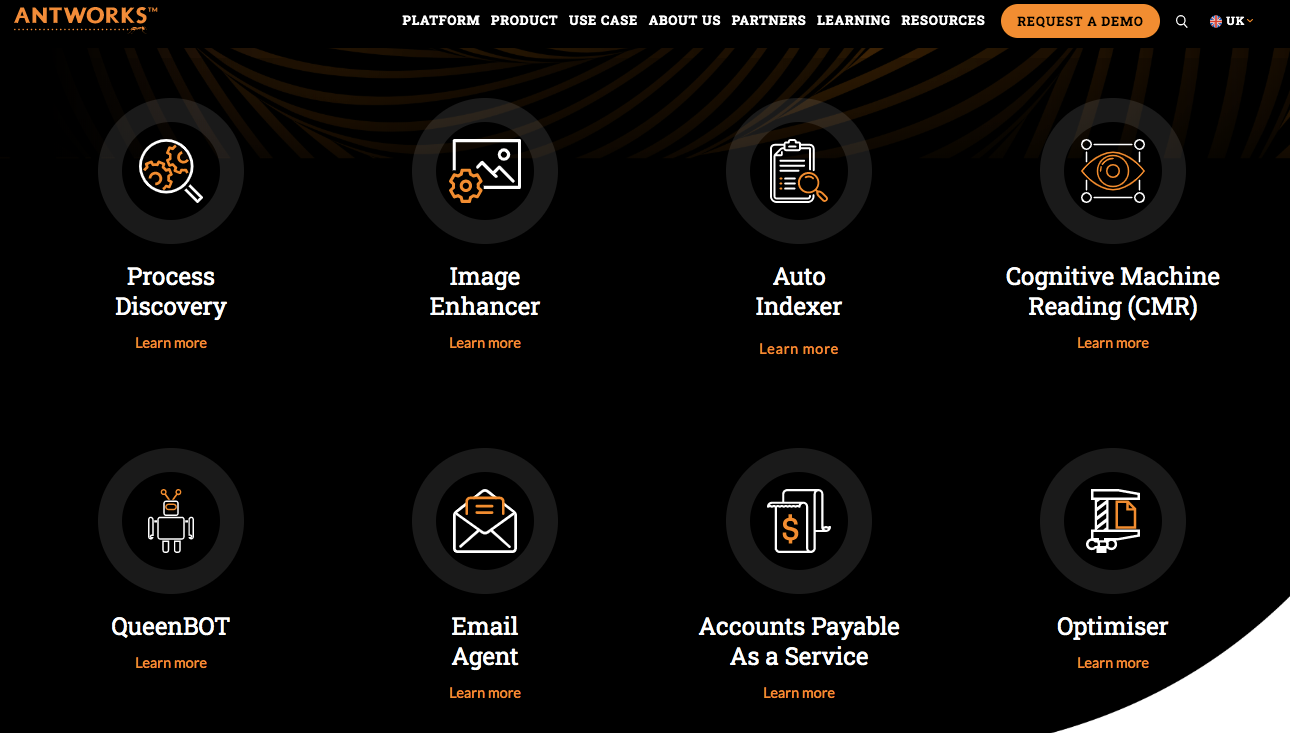 The core AntWorks product offerings as of early 2020

The AntWorks offering itself is based on the principle of 'Integrated Automation' because the company believes that process automation takes a good bit more than just an RPA offering. They divide their solution into four product segments, broken down into Intelligent Automation, Intelligent Document Processing (IDP), Fractal Science-based Artificial Intelligence/ Machine Learning (AI/ ML) that includes handwriting, RPA itself, and process discovery, along with other associated solutions (see product view above.) These are all wrapped together into a seamless solution for those that want to to identify the processes with highest automation propensity, pull data out of forms, images, or really, anything, and then automate the business processes that use that data.

Overall, there are six key takeaways from the various presentations of our day at ANTENNA 2020. Given the relatively newness of AntWorks to the industry, I will couch them as key differentiators, because that's what they are:

That said, I do have a few minor concerns with a couple of key aspects of the strategy of the company. While they are very careful to build deep partnership with implementation firms and professional services companies that should drive delivery, growth, and net new logos, I believe they are still underpartnered for global growth. In fact, many geographic regions and industries will likely struggle to obtain local AntWorks implementation teams quickly enough, at least for a while. But I suspect they will solve this issue relatively short-to-medium term. Second, they don't have a clearly articulated future roadmap (or are at least not willing to share one yet, considering market competitiveness). While many tech vendors don't have this either, I find it's one of the most sought after pieces of information that buyers want. They want to understand where they are going to be taken. It will be helpful to see at least a high level product roadmap provided by AntWorks in the future.

Finally, there is probably one more key differentiator of the AntWorks platform, and that is a higher than average degree of usabilty. But I have not been able to personally verify that's the case yet, but I'll provide an update when I do.

In the end, it's clear that AntWorks knows what it's about and where it's going. The company has a very well-defined identity and industry objective, which is to bring end-to-end intelligent automation to a truly global market while upholding the highest industry standards of Ethical AI and customer security/safety, with RPA at the core. Their customer case studies were impressive as well, and were among some of the better ones I've seen. Thus, I came away from ANTENNA 2020 with newfound respect for the company, its aims, and its products. It also reaffirmed for me their place on our RPA ShortList as a prime automation platform for digital transformation in the enterprise.

My live tweet stream with real-time analysis at #ANTENNA2020

2020 Predictions for the Future of Work and Automation

The Digital Transformation of Back-End Customer Experience with AI