Last week I had the opportunity to attend Google’s I/O conference in San Francisco, and one thing was abundantly clear: Google wants developers to build Android apps.

The conference was sold out quickly as usual and the 6500+ attendees were treated to probably the best setup and conference floors that I have seen at Moscone West.

Open talk area that were separated by cardboard and wooden elements, created a unique atmosphere. A 270 degree video wall during the keynote was unique, too – not only could you play a mega version of Pong, but a whale swam by… More remarkably all talks were just 30 minutes long, so a huge chance for the attendees to dive into many areas of interest. 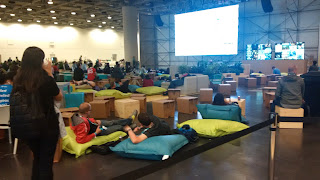 In contrast to previous editions of Google I/O, the 2015 edition was all about Android. In the past we saw the Chrome vs Android debate, we saw ‘moonshot’ projects like Loon, self-driving cars and Google Glass (saw less than a handful at the conference), major software platforoms like Wave and Google+ being unveiled. This year the only mention of Chrome was as part of a new feature in Android M. Android Auto (4 cars were in the exhibit area on level 3) didn’t get much room. It is not clear why Google was all focused on Android, see my take on it in the MyPOV section below.

Here are my Top 3 takeaways:

Developer Focus – As mentioned Google wants developers to build more Android apps and apps that are more tied into Google specific capabilities and services. Google Cloud Messaging is one example. Exposing app content to the Learning graph is another. Up taking Polymer will make developers more productive and likely expose the content ‘automagically’ to GoogleNow. The most intriguing benefit to build on the Google platform from a monetization perspective were the new capabilities to present an app differently on Google Play – testing designs, getting usage analytics and automated content management are setting Google apart. And Google has a ‘higher ground’ advantage here – as developers trust that google has the web site / Play Store analytics down. 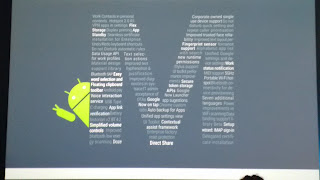 IoT – The announcement of Project Brillo and the Weave protocol is probably the most fundamental and lasting announcement Google made at I/O. Especially as we learnt in a Q&A with Dave Burke later, that the IoT updates will roll out with the Google Play services on a regular level – so every Android device is becoming a potential control point for IoT. That makes Android the largest IoT platform from a user reach overnight. A lot of things will have to happen, many end points have to be created, but the Nest acquisition by Google now makes a lot of more sense. And ‘things’ makers will want to connect their things to widely available, starting with the leading platform – and Android is the one / one of them. That will ensure the Weave uptake from nothing today. And as Google does not want to monetize the usage of Weave and Brillo, I’d be expect if it would not see similar popularity like Android. Google competitors need to realize that Google is not on this for the software revenue, but for the data. That makes competition asymmetrical and likely in Google’s favor. 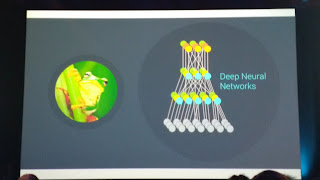 GoogleNow – As a strong believer that nothing will change our future more than ‘true’ analytics (more here) , the new availability of Google now ‘on tap’ is very powerful. We know analytics get better with more content and context – with Google now being able to take the current screen content as parameters for GoogleNow questions and services will make these (even) better. Google shares that the (neural) learning trees are now 30 levels deep. To put it in perspective: If I remember neurology correctly, human brains decision trees are 10 levels deep, but then our brain has some more tricks up is sleeve… Already Google has pushed down not understood words to 8%, and that by itself – considering the multiple languages GoogleNow supports, is very impressive. And the GoogleNow team is correctly playing in a multimodal world, so pressing the <Home> button in one app / time point vs another will run different models. When I asked when / if Google will have a neural model for each user, I did not get an answer, but I am sure that is where Google is heading – if it has not arrived there today already. 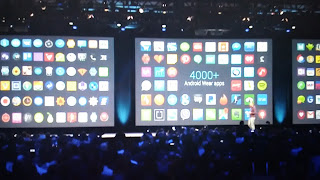 A new, unique content selection by Google for I/O. Speaking with repeat attendees they were not ‘blown’ away, citing a lack of exciting announcements compared to previous editions. But when speaking to Android developers, they found the event very useful as they were able to capture significant insights and even get some hands on experience. Maybe Google is at the point where it needs to split its conferences – which to a certain point the vendor has done already with the Google Cloud Platform (GCP) roadshow. When I asked Googlers about the absence of other major topics, they cited little interest on GCP by Google I/O 2014 attendees. Interesting as the Microsoft developers hoarded into Moscone West a few week ago for BuildWin were highly interested in Azure (Event report here). But then few Microsoft developers can make a living building Microsoft mobile Apps, many of the Google I/O attendees do, and I guess that creates a certain focus on their side and demand for content from Google.

And if Google has done one thing clear, it wants developers to build more Android Apps. New tooling, better go to market, easier monetization, differentiating capabilities all are capabilities that make developers take note and care. And Google is in a battle with both Apple and Facebook on this. Apple is likely to be the #1 target, as there were numerous port, deploy and co-existence options (e.g. Google Cloud Messaging extend to iOS). It will be key to see if all the features will provide enough attraction to shift the market shares in the mobile platform competition.

At the same time Google is also under pressure to make sure Android remains attractive and create such a R&D lead that the many Android flavors that have come up in the recent years do not lead to a further defragmentation of the Android experience. On the one side it is great to see the diversity of wearables, smartphones and tablets – on the other side it hurts Google in a cross device experience for end users. Google is trying to end this conundrum by out-innovating (and likely out-spending) the handset makers, and new features like GoogleNow on tap using the Google development frameworks create the uptake through apps (developers) to ensure a more consisting Android experience.

Lastly let’s be clear that Google is a massive data gathering operation. Making Google Photos free and unlimited solves a huge pain for consumers, but also gives Google a chance to learn more about them. And overall Google needs to collect more data, because at some point in the future there may be a better search algorithm for the web than Googles. The big difference today is that scaling that algorithm is easy in the cloud age (remember Google had to developer the super computer needed for that), so better answers are powered by predictive analytics like GoogleNow. And analytics success is determined by more data always wins, in the long run. The more data Google has, the better the predictions will be the more likely it will delight consumers and with that help Google’s advertisement business model. Nothing new here, what is bugging me at the moment is, that I cannot fathom the business model beyond ‘Do good’ behind Google Photos. Combining pictures without the personal content for immersive experiences and simulations will be an option, e.g. if a consumer books travel through (a not yet existing) Google travel app – you can see the view of the hotel room, maybe even the hotel room before you request it (certainly including the rating of previous users). Google may also be able to replace the Google cars that capture Streetview. It will be very interesting to see how Google will monetize pictures – it is funny – the business model is clear, but not the how. For now. And Google says they want to create a ‘sticky’ app and an app user’s return to everyday. Photos certainly helps here to create a Google unique ‘moat’ to the competition.

But to remain relevant the Android ecosystem needs to grow, and for that it needs apps. The only statistics of significance was that there are 1B+ users of the Play Store and that in the last months 50B apps have been installed. That’s a lot of apps. But rumor is that active Android device growth has flattened out (Google offered no stats – in contrast to previous years), and that maybe the ultimate motivation to dedicate the 2015 I/O almost exclusively to Android.

If my schedule allows I will blog about the enterprise takeaways later… checkout my Keynote First Take here – including a Storify Tweet Collection and a Meerkat capture.