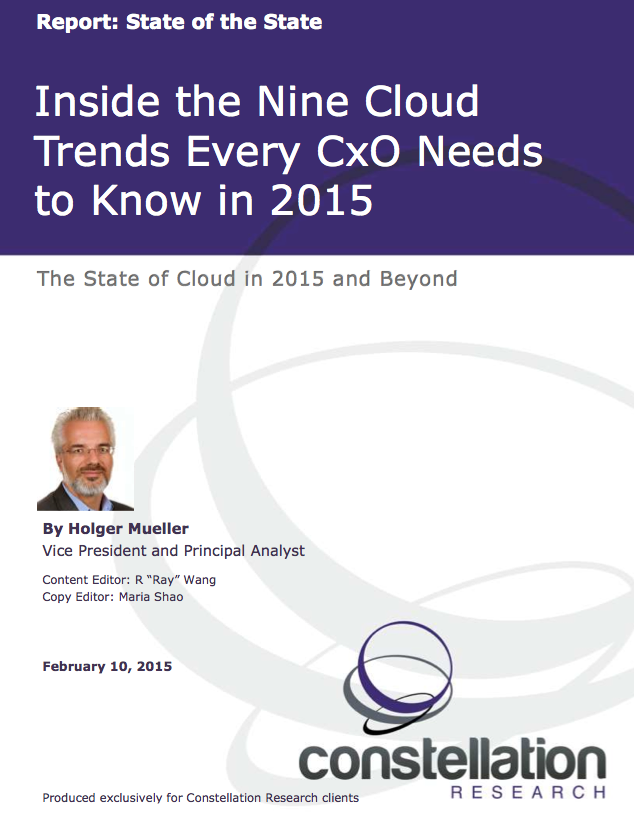 The State of Cloud in 2015 and Beyond

This report looks at the nine most important trends in cloud technology in 2015 and beyond. Cloud computing has morphed from being a simple utility to running a set applications on a piece of middleware. Most vendors have transitioned to a platform zone, which has allowed them to create middleware platforms. The consequence is that Platform as a Service (PaaS) will disappear even more as a market category in 2015. CxOs need to be aware of the benefits, but also the lock-ins, that come with using cloud as a middleware platform. At the same time, OpenStack will lose its unity as the participating vendors see more economic benefits for themselves by differentiating beyond the compatibility layer. And beyond OpenStack, there is an overall need for cloud vendors to specialize in order to differentiate from the market leader.

Despite the success of the public cloud, most enterprises will still have hybrid deployments as the predominant form of cloud adoption. At the same time, growing legal and statutory requirements will make the location of data centers a key criteria for enterprises selecting cloud vendors. But enterprises will also realize that for the next-generation application demands, there is no alternative to cloud adoption. The nature and demands of next- generation applications force the adoption of cloud, as cloud qualities are key for the benefits that enterprises want to garner from these applications.

Cloud adoption will fundamentally transform IT organizations. Locations, jobs, positions, skills and the self-understanding of IT’s role in the 21st century are dramatically changing. The next decade will see more changes for IT than the function has seen since its inception in the 1950’s.

Lastly, the currently popular paradigm of “bi-modal” IT is flawed. More than ever, IT must play multiple roles, making the dual mode understanding an oversimplified and even dangerous model for IT professionals to apply to their decision making. In contrast, a “multi- modal” IT approach is best, allowing IT leaders to apply simultaneously innovative and conservative IT strategies to all facets of enterprise automation.

The goal of this report is to give a high-level and comprehensive analysis of key trends in the cloud space in 2015 and beyond. It allows CxOs to familiarize themselves with the trends and then drive to conclusions and first actions for their respective enterprises.