When most organizations think of Microsoft, they still think first of PCs, Windows, and Microsoft Office. They often don't fully perceive the fast-growing cloud juggernaut of today, replete with the very latest enterprise technology capabilities such as their rapidly evolving suite of Internet of Things solutions, industry cloud solutions, or growing machine learning capabilties. Nor do they regard Microsoft as a likely strategic digital business partner to help them fully reach their digital potential.

However, given that the global value of the digital growth in the next decade is estimated at a sobering $8 trillion in additional commercial value creation ($28 trillion in total new economic output, of which 28% or so is digital), today's tech giants have a newfound sense of their economic influence, even their ability to shape corporate destiny using sophisticated and powerful new digital business capabilities. Not surprisingly, these vendors seek to claim their role in this unfolding saga, and even help write history a bit along the way. 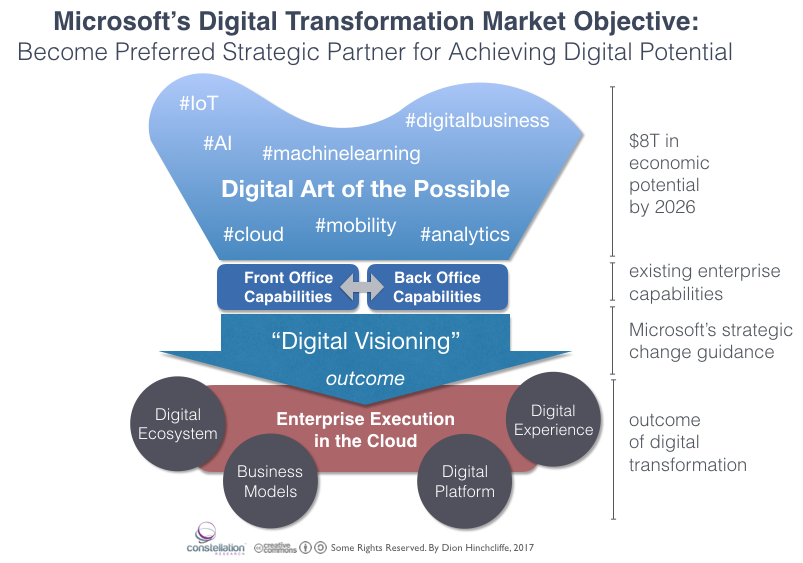 Microsoft clearly senses this historic inflection point and would like to be perceived as a top player. Thus the computing giant is currently in the process of trying diligently to change the perception of the organization as a vital enterprise-class business partner, not just another big technology vendor. As part of this ongoing effort, I was invited last week to attend their Digital Difference event, an invite-only confab at the historic Cedar Lake event center in West Chelsea, where they showcased in a carefully staged and well-orchestrated half-day session how they have expanded  "up to the stack" to help some of the world's leading organizations digitally transform their businesses.

Hosted by Abbie Lundberg of Harvard Business Review's Analytics Services, who was also joined on stage by Microsoft's Judson Althoff, who is Executive Vice President, Worldwide Commercial Business at Microsoft, the company's perspective at the event was quite clear: 1) Companies have been underestimating the urgency and scope of digital transformation and can no longer put it off. 2) They must find ways to realize their digital potential, not just to thrive, but to survive, and that 3) Microsoft has had a growing role in partnering with large enterprises at the most strategic level to help them plan and executive on their digital future. It was this last part which was the main objective of the event. 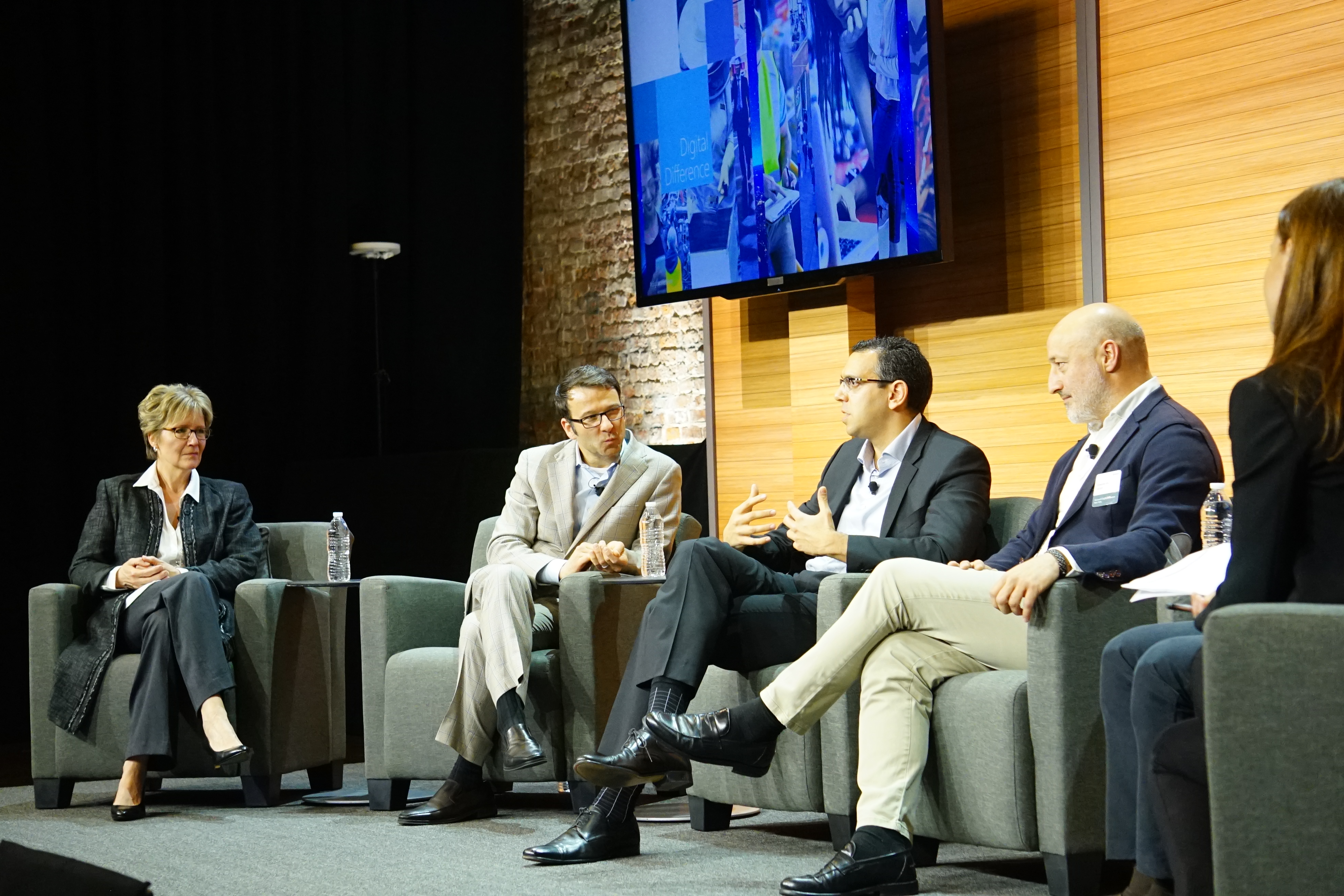 Throughout the event and quite commendably from my point of view, Microsoft was intent on demonstrating real proof points of their work with respected large brands, instead of just providing marketing soundbites on the importance and urgency of digital change. For me, the key customer stories I witnessed at Digital Difference were:

Numerous other enterprises had booths at Digital Difference as well, and most of the stories were interesting, if earlier stage than the examples above. Interestingly, Microsoft's Hololens was on prominent display and I had a chance to use one for the first time to view building models that architecture firm Trimble and Gensler used to visualize initial designs for customers, and was a compelling vision for the future of that industry. Microsoft's Connected Car was on the showcase floor as well, and was a popular attraction.

Finally, I was able to sit down with Microsoft's Judson Althoff personally to have a one-on-one conversation about how Microsoft is thinking about how best to work strategically with the customers on digital transformation of their business. Judson noted that the "world of customers becoming much more digital" and that what enterprises often don't understand is that it becomes "an order of magnitude more complex to deal with digital scenarios", which is why technologies like machine learning (to handle the volume and combinatorics) is critical to future digital solutions and customer experiences. Judson also had a mantra he repeated several times during the day, which is that "your systems can only be as good as the data over which it reasons." This insight combined with overall "underestimation of what it really means to be digital" has led Microsoft to work with customers on "four categories of deep dive questions that we take our customers through." Namely, asking them if they are truly digitally transforming their "a) customer engagement b) employee empowerment c) optimization of operations, and d) product transformation."

At the end of the day, the result of this work with customers -- typically encompassing Iot, data, and intelligence -- should "turn them into a digital ecosystem," Judson told me. By doing this well, the total addressable market (TAM) for Microsoft becomes far greater than total number of servers and PCs, but essentially all business activity, greatly increasing the market potential for Microsoft to grow and have impact, he noted. I believe this last point is one of the key motivators for Microsoft to become a strategic business partner, instead of a "just" major technology vendor.

There is little question that Microsoft has the skills and delivery capability in terms of a global cloud presence that truly understands the the technology needs of the world's largest organizations. Now the hard work is about crossing over to the business side of the digital conversation. Microsoft's proof points on strategic digital partnership certainly represented some large, well-known enterprise names, and they were able to get several of these organizations to say very encouraging things about their digital partnership so far. However, only Hershey was on hand -- at least in my conversations at Digital Difference -- with hard data it could show that the result had real business impact. So the other half of the equation, the business side where Microsoft provides business guidance based on the art of the possible with digital today, is something that's going to take more sustained storytelling over the next few years.

That said, I don't have much doubt, however, that Microsoft can grow and become a competitor with the Accenture Digitals and Deloitte's in this space. In the end, for them to fully deliver on the vision of enterprise digital empowerment that Microsoft was conveying at Digital Difference will require repeated and sustained evidence like this. Business leaders, particularly the CEO, must receive a steady and very clear sense that Microsoft belongs at the strategic planning table in the boardroom as an equal partner -- as much as it has crediblity in the office of the CIO today -- in terms of fully designing the long-term digital future of organizations. Microsoft made a good down payment against this vision at Digital Difference and I hope they continue the ongoing effort, as it was a painstaking-produced and high quality event that should help further their objectives in this regard.

event report, microsoft
Stay up to date with the latest disruptive technology.