Here’s why I added MariaDB -- along with DataRobot, Datawatch, Domo, Kylo and Unifi -- to my latest Constellation ShortLists.

Scalability, analytical capabilities and encryption: these were a few of the reasons cited by customers for embracing MariaDB that I heard at the vendor’s February 26-27 M18 user conference in New York.

MariaDB is an up-and-coming database management system (DBMS) created in 2009 by founders of MySQL. This fork came about in the wake of Oracle’s acquisition of MySQL as part of its purchase of Sun Microsystems. A big part of MariaDB’s appeal remains its MySQL compatibility, although differences have emerged in certain areas as the paths of these two database products have diverged (but more on that later). 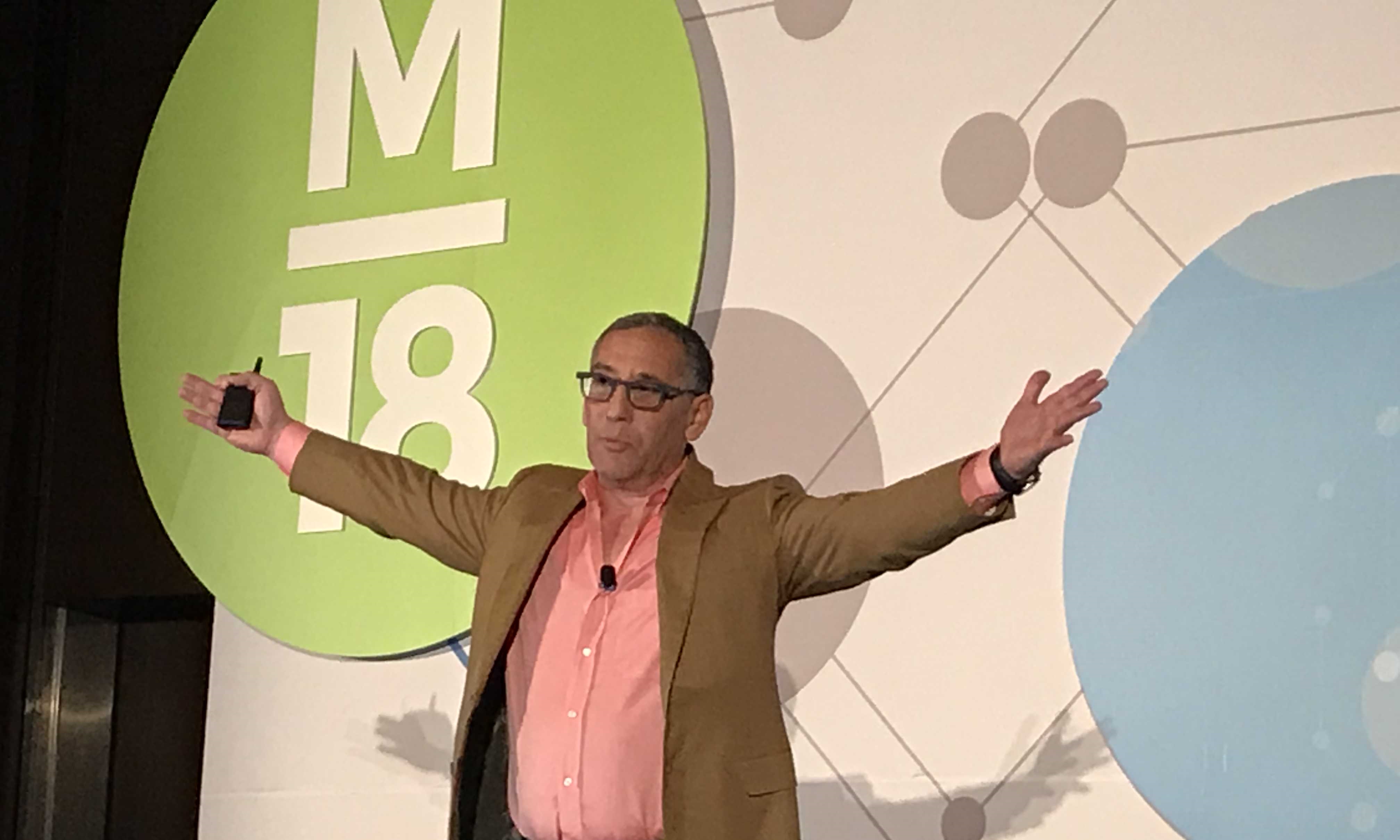 Scalability came up in a keynote by customer Tim Yim of ServiceNow. Yim detailed ServiceNow’s massive deployment in which its multitenant, cloud-based platform runs nearly 85,000 instances of MariaDB TX. The deployment has spawned more than 176 million InnoDB tables and sustains roughly 25 billion queries per hour, despite constantly changing query patterns.

Analytics was the topic of my conversation with Aziz Vahora, head of data management at Pinger, the 12-year-old company behind the TextFree app for Wi-Fi texting and calling and the Sideline apps for adding a second phone number to smart phones. Pinger has a years-old data warehouse built on MySQL and InnoDB that it never expected to grow to its current size of seven terabytes. Maintaining analytical performance has been increasingly difficult, requiring extensive sharding and laborious data management.

Pinger considered options including Snowflake and Amazon RedShift, but when he learned that MariaDB was working on an analytical version of MariaDB, introduced last November as MariaDB AX, he signed on as a beta customer. MariaDB AX is a columnar database, which makes a huge difference in analytical performance, but the appeal to Pinger was MySQL and InnoDB compatibility, so it wouldn’t have to change any reporting or SQL code. 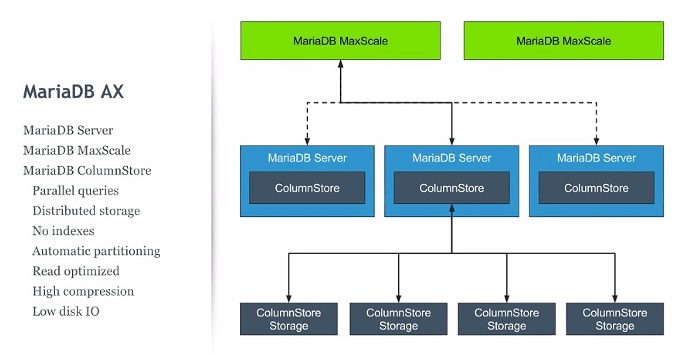 MariaDB AX, introduced in 2017, is a columnar version of the database that offers analytical
advantages including high compression, faster querying and simplified administration.

Pinger wanted to add yet more data to the data warehouse, so it took three months to build an entirely new data pipeline to feed MariaDB AX. Once that was done, it wasn’t difficult getting data into the MariaDB AX columnstore, according to Vahora. The benefits have been many, he says, including 6X to 7X compression (so seven terabytes translated to just over one terabyte in the columnstore). With these economies Pinger plans to retain two years’ worth of data rather than six months. Most importantly, query times are 30 times to 100 times faster, depending on the data and query complexity, according to Vahora.

“In one example querying against six months’ worth of data across many users, an analysis that used to take two days took less than one hour,” said Vahora.

Encryption was the feature that attracted William Wood to MariaDB. In 2015, Wood, Director of Database Architecture at Financial Network Inc. (FNI) in St. Louis, was looking for an alternative to expensive commercial databases as the backbone of a standardized-yet-configurable application that could serve many bank customers in place of custom software. FNI is subject to the Payment Card Industry Data Security Standard (PCI DSS), which calls for encryption of data in transit and at rest. It so happened that MariaDB 10.1, released in 2015, introduced encryption at rest (ahead of several competitors that have since followed suit). FNI has since built out its standardized application, called Blueprint, as a price-competitive alternative to custom software, and Wood says the company is landing new customers as a result.

MariaDB remains compatible with MySQL 5.5 and with later releases in most respects. The latest releases have diverged in the handling of capabilities including clustering, JSON support and geospatial functions. From MariaDB’s perspective, there’s still a huge population of organizations deployed on MySQL 5.5 and compatibility isn’t much of a problem for those on more recent releases of MySQL but not implementing clustering, JSON support or geospatial functions.

MariaDB is not counting on MySQL compatibility alone. If all else is equal, why move? That’s why MariaDB is also innovating with novel approaches to scalability, performance and analytical capabilities with AX. The vendor is also going after commercial competitors. MariaDB 10.3, now in beta, introduced Oracle Database compatibility through support for of a subset of Oracle PL/SQL for MariaDB Stored Functions.

Pervasiveness is also crucial. MariaDB was already available as a cloud service as one of the six flavors of  Amazon RDS. But the reason I added it to my just-published “Constellation ShortList for Hybrid- and Cloud-Friendly Relational Database Management Systems” is that Microsoft last year joined the MariaDB Foundation and launched its own MariaDB service on Azure. This made MariaDB a fit with my ShortList requirement of being available as software, for on-premises deployment, and as a service on multiple leading public clouds.

At M18 MariaDB announced its intention to add its own database service, which is expected to debut later this year. Details weren’t available from the vendor, but I expect to see an initial launch on AWS with Azure and, most likely, Google Cloud Platform to follow. That’s the pattern I’ve seen from other independent database vendors who what to support multi-cloud strategies with cloud-portable services of their own.

Other Adds to my Constellation ShortLists

Among the other vendors I’ve added to various Constellation ShortLists are the following:

Datawatch made my Constellation Shortlist for Self-Service Data Prep. Datawatch has recast its venerable and extensive data-connection and data-transformation capabilities and has since seen steady, double-digit growth in demand for its Monarch and collaborative Monarch Swarm data-prep products.

Domo made my Constellation Shortlist for Cloud-Based Business Intelligence and Analytics. Domo was added based on its fast growth, surpassing 1,000 customers in 2017, and its progress in serving high-scale deployments with thousands of users. The company has also pushed into predictive capabilities and added support for hybrid deployments with federated data access without bulk data movement.

Kylo and Unifi made my Constellation ShortList for Data Lake Management. Kylo, which is offered by Teradata’s Think Big Analytics unit, was added based on the combination of dozens of successful deployments within large, well-known enterprises and significant contributions from a growing open source community. Unifi was added for its breadth of capabilities extending into data cataloging and self-service data preparation.

The Constellation ShortLists are published twice per year, in January and July, and are freely accessible at ConstellationR.com.