The global workforce market is in the midst of one of the largest transitions in its long and varied history. It's a change that anyone who has used Uber or TaskRabbit will be quite familiar with. Instead of hiring somebody to do work directly, one taps into a community of people within a digital platform to do the work instead.

Often referred to, sometimes unappreciatively, as the "Gig Economy", this steadily evolving model of crowdsourcing work has matured in recent years from a way to accomplish specific, easy-to-outsource tasks that are largely tactical in nature -- such as designing a logo or providing virtual accounting services -- to more sophisticated and higher order knowledge work like application development or project management for even the largest organizations.

Gig Economy employment has sometimes been perceived as an activity more in the margins than the mainstream. However, this is significantly changing around the world. The steady year-over-year growth (double digit for the next several years, to become a very respectable $455 billion industry by 2023, according to Mastercard), combined with relatively conservative predictions from McKinsey that 375 million workers will change their fundamental job categories by 2030 paints a picture of the real future of work: A much more blended workforce of fewer permanent hires that are well augmented by more flexible, personalized, and dynamic work relationships. 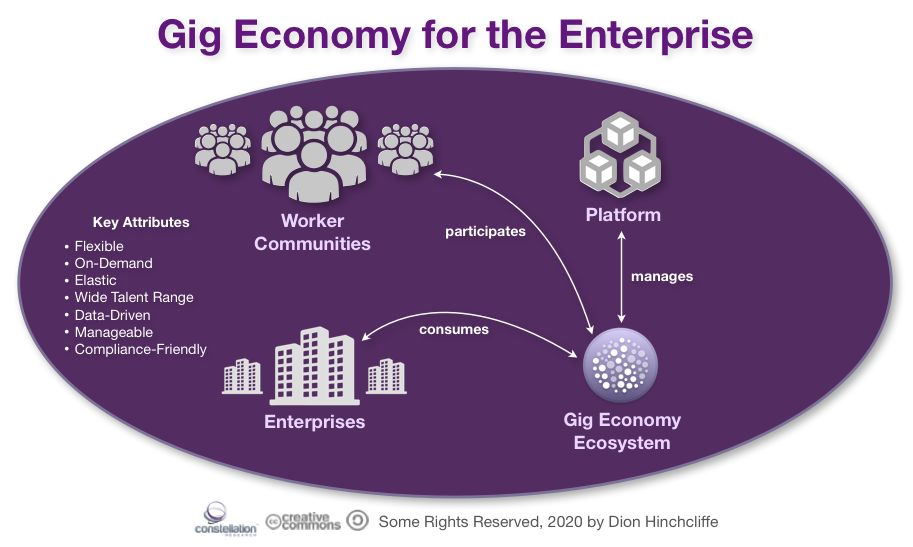 One key nuance that's often missed in this discussion is that so-called gig economy platforms are really much more online communities than they are job boards. The latter is primarily transactional and occasionally used to locate work, with little personal connection. The former is more relationship-based, used often with high levels of engagement, and with a real, and often lasting, connection. These platforms are designed to sustain careers long term, while working directly for businesses is more used to sustain individual steps in a career.

Today there is no shortage of what I often to refer to as "task companies", that will find you someone to fix something, transport something, or carry out a straightforward task. There have been nuermous attempts over the years attemping to increase the capabilities of gig economy solutions to address more sophisticated -- and far more valuable -- work activities. But they were typically lacking an understanding of what businesses really need to adopt Gig Economy workers (support for teams, data analytics/reporting, global coverage), or what workers would require to switch their preference of employment source from a business to a digital platform.

Given its newness and unfamiliarity to many, the Gig Economy has sometimes been heralded as the "End of Employees". Yet that's a gross oversimplification of the trend. What we really need to understand is how the gig economy, in its best form, represents the personalization of employment and the empowerment of workers. For businesses, its about being able to tap into on-demand talent in a more convenient and customized manner.

Consequently, understanding what exactly is possible today with more mature Gig Economy solutions is something that would help many professionals currently sourcing talent for their organizations, projects, or teams, given how the employement landscape is currently changing so much today as a result of technology advances.

To help get a handle on this, I sat down recently with Chris Keene, the CEO of Gigster, one of the top firms in gig economy services for the enterprise at our recent Constellation Connected Enterprise event in Half-Moon Bay. I sought to obtain a current picture of the digital freelancing when it comes to its current state in the enterprise. The video is below and a transcript follows. Key advances in thinkng and practice are evident, including:

Transcript of Dion Hinchcliffe, VP and Principal Analyst of Constellation Research, of his interview with Chris Keene, CEO of Gigster.

Chris Keene: Companies need to decide whether they want to join the club of digital innovators and adopt Silicon Valley style thinking and culture or whether they're okay staying where they are.

Dion Hinchcliffe: So Chris, tell us about yourself and a little bit about Gigster.

Chris Keene: Great. I've been a public company and private company CEO for the last 20 years and had had different companies that I took public and sold to companies like VMware. I came into Gigster to help create a new kind of software platform, a new experience that we deliver both as a managed service for enterprises, as well as a platform that enterprises can adopt to manage their own in-house and contract labor and deliver software and innovation much more quickly.

Dion Hinchcliffe: Well, the Gig Economy has been with us for a while now. How has it better adapting to the needs of businesses?

Chris Keene: We're seeing a lot of enterprises who say "we want to have a more flexible workforce" and "we want to adopt a lot of these Silicon Valley capabilities" and for example, a very large telco company has started to create these hybrid teams of freelancer workers with their own employees and managing them in such a way that they believe they can deliver software as much as twice as fast. Densu, which is the world's fifth largest advertising company, has actually created an entire organization using the Gigster platform to allow them to staff, both in-house as well as freelancer work, and then manage that work to deliver innovation enterprises need, a cultural shift that is completely focused on the customer experience, and that includes what we call the success formula, finding the right talent, whether they're your employees or whether they're freelancers or contractors. That has not just the right skills but also really a passion for solving customer problems. Tying that with techniques like agile and lean, making sure that what you're building really does meet customer needs to deliver the right solution, at about twice the rate of traditional approaches.

Dion Hinchcliffe: What do you recommend that organizations do to supercharge their workplaces today?

Chris Keene: So the question is, how do you create a culture of looking at your employee and your employee experience from a digital lens the way a Silicon Valley company would and look at this more of a cultural journey that a technical journey. Then I think that opens up a possibility to change managerial structures and compensation structures.

Dion Hinchcliffe: So what's coming next in the gig economy that's must-watch or must-experiment with?

Chris Keene: So when you start orchestrating distributed teams, marry that quantitative data with qualitative data about what kind of customer experience was produced and how happy are the team members working with each other and how happy is the customer with the team. We believe Gigster is uniquely positioned to capitalize on this data stream coming from staffing and managing projects, because our platform allows us to capture data at every step of the way.

Dion Hinchcliffe: It sounds like moving to a culture of innovation would be a really big step. How do companies get started?

Chris Keene: I think Gigster platform really kind of comes in two flavors, we staff and manage software delivery projects, either with us doing the management, and then blending your people and our people on a team, or with you doing the management, and now you're running all of the dials. And one of the things that I think really differentiates Gigster as a company, is that the platform that we created for staffing and managing delivery of software projects, is something that we built doing it 5,000 times ourselves. And that's given us a level of data and a level of optimized process, that's allowed us now to offer that same platform to our customers to help them better manage their processes.

Dion Hinchcliffe: So how do you compare and contrast, your digital transformation approach to the big integrators who have pretty advanced and large practices today?

Chris Keene: The first is not to deliver a specific set of functionality. Our goal is really to help you change your culture by co-innovating with you, so everything we do is from a team perspective, and our process is focused on in particular teams that are focusing on customer-centric outcomes. So that's really quite a lot different than a traditional staffing provider.

Dion Hinchcliffe: So how does Gigster help enterprises access here to for inaccessible talent?

Chris Keene: Gigster makes it possible for people to enter the digital talent space in a way that doesn't depend on where they went to school or who they know or where they live, but it's really just based on the value and quality of the output that they produce.

The Digital Power Values for The New C-Suite: The Modern Mindset of the CXO