Here are the takeaways from the short press release: (all emphasis added)

MyPOV
This makes the announcement's scope larger than the one with Microsoft yesterday - as it not only includes infrastructure and platform, but also applications. Applications were not mentioned yesterday, so there were clear implications to the application space with the added capability to deploy Hyper-V applications to an Oracle WebLogic and Database stack on Azure. And makes sense as salesorce.com is  much more a SaaS company than the  more IaaS and PaaS centric Microsoft Azure offering, that was the partnering product yesterday.

MyPOV
Oracle Linux gets a lot of work in the near future, being the OS of choice to deploy the Oracle technology stack, both for Microsoft Azure and the Salesforce.com cloud infrastructure. Likewise the Oracle Database will power both, we think starting with Oracle 12c and that release enabling later mentioned benefits and its general availability happening any day now.

The difference to the Microsoft announcement lies in the commitment to Exadata, but that again should not surprise, as salesforce.com's cloud infrastructure (so far?) has been designed around very large database servers. This is the sweetspot for the Oracle engineered systems, not so much the lower end that is used in most IaaS offerings.

MyPOV
And here we come to the application aspect of the announcement. The integration of salesforce.com CRM products with Fusion HCM and Fusion Financial Cloud was a surprise. This maybe the reason for the inclusion of Java Middleware Platform in the announcement, as this integration is clearly in the responsibility of Oracle. And Oracle certainly wants to use their homegrown and standard Fusion integration products with Java Middleware Platform.

In return salesforce.com will implement Oracle Fusion HCM and Financial Cloud, making itself a key reference for the integration. This is a bold and disruptive step replacing Workday for HCM and taking salesforce.com away as potential reference case for the salesforce.com ecosystem, as e.g. Financial Force was mentioned as an option for salesforce.com future finance automation back at Dreamforce 201. And it is a Fusion showcase in itself, too - as salesforce.com uses Oracle Financials today.

But it raises questions for the future of work.com, the recent HCM acquisition of salesforce.com And gives salesforce.com potentially the much needed, cloud based, out of the box integration to an ERP package.

Though not announced, this could setup salesforce.com as giant re-seller of Oracle Fusion Apps. Other ERP vendors (SAP!) would no longer be able to marginalize Salesforce.com as a CRM only vendor. The analogy to Siebel Systems, that ultimately ran out of roadmap and products to sell, and led to its demise and to the Oracle acquisition - would also be addressed for salesforce.com

Takeaways from the Quotes

“Larry and I both agree that salesforce.com and Oracle need to integrate our clouds,” said Marc Benioff, Chairman and CEO, salesforce.com. “Salesforce.com's CRM integrated with Oracle’s Fusion HCM and Financial Cloud is the best of both worlds: the simplicity of salesforce.com combined with the power of Oracle.”

“We are looking forward to working with salesforce.com to integrate our cloud with theirs,” said Larry Ellison, CEO, Oracle. “When customers choose cloud applications they expect rapid low-cost implementations; they also expect application integrations to work right out of the box – even when the applications are from different vendors. That’s why Marc and I believe it’s important that our two companies work together to make it happen, and integrate the salesforce.com and Oracle Clouds.”

“With over 1 billion complex transactions delivered every single day, an Oracle Linux and Exadata Infrastructure will make salesforce.com a more efficient company – and our customers will benefit,” said Parker Harris, Co-Founder and Executive Vice President, salesforce.com. “Deploying Exadata engineered systems throughout our data centers will allow us to significantly lower overall hardware, floor space and energy costs, while simultaneously providing our customers with higher performance and better reliability.”

MyPOV
Ellison and Benioff mention integration four times in their short statements, Larry beating Benioff 3:1, not surprisingly as Oracle has been honing the integration message much longer than salesforce.com. But we think that both CEOs are on the right path - customers expect simplicity (Benioff), rapid low cost implementatoins and out of the box working integration (Ellison).

Oddly Parker Harris gets an unusual 3rd quote in the short press release, as these are usually balanced afairs - but he raises the key value drivers that in our view have led to this partnership: More efficiency and ultimately lower Total Cost of Ownership (TCO) to run a cloud infrastructure.

Oracle must have something, that these days every cloud company seems to want - a reliable database, an attractive technology stack and first of all a very attractive TCO.

At OpenWorld in 2012, when Oracle unveiled 12c, this slide caused some uproar in the database community: 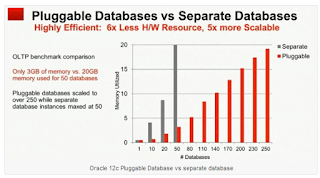 There was a reasonable debate if the use case was realistic etc - but at the end of the day, if with 12c savings from the confusingly multitenancy labelled feature are only 20% of what Oracle claimed, then Oracle 12c is a huge TCO saver. The famous no-brainer to implement. And very compelling for Oracle customers (like salesforce.com) or vendors with a database problem when turning to the cloud (like Microsoft).

And while the rumor is out there, that this is a 9 year deal and salesforce.com is paying something in the area of 300M US$, it's still a good deal financially for salesforce.com. Quick back of napkin calculation: 9 years are 108 months, let's make it a 100 months for easy math, meaning salesforce.com pays about 3M US$ per month for using Oracle's Database, and more. Assuming it would just be the database - not a bad number, if you look at the alternative (see below). And salesforce got more - Java Middleware, probably some Exadata and possibly even the usage of the Fusion Apps.

The alternatives for Salesforce.com were limited

Of course salesforce.com could have staid where they are today. But then it would have surely spend more on running its current cloud technology stack. And the Oracle part of that would be aging quickly. And salesforce.com has always been on the lastest Oracle database releases as soon as they could be confident to run the release. And there is a benefit to be current.

From the scale that salesforce.com runs - with north of 1B transactions - the only option would have been IBM. But similar to Microsoft  which faced a similar due diligence questions - it ended up with Oracle. Like in yesterday's post - the praise goes to Andy Mendelsohn and his team.

Oracle gets a design and marquee win - the largest SaaS vendor in the market. And a potential reseller or joint sales engagement partnership at SAP customers, where salesforce.com is very successful at selling into. At the same time Oracle is the database of choice in all large clouds, but one (Google).

Salesforce.com can put away some key technology decisions, they are taken for the next 9 years and likely longer. And it gets an cloud ERP option to counter enterprise scale arguments in competitive engagements with SAP. Personally I would expect the salesforce.com account manager to have the roadmap for the joint salesforce.com CRM and Oracle Fusion App in every slide deck when competing with SAP.

When two larger cloud players agree to better integrate their products their customers win. When they choose solid technology as their foundation, and when the products of that foundation get hence more usage - customers win again.

It will even give SAP and Infor customers (just to mention the other 2 players out of the Top 4 enterprise application vendors) - more options on what to deploy for their enterprise automation products. And an overall positive trend when the CEOs of two key cloud players see lower operating cost and pre-built integration as key trends they need to address going forward.

We have seen act II for the Oracle composed The cloud changes everything piece. Who would have thought the sudden amicable relationships respectively for Oracle and Microsoft and salesforce.com would come up - ever. Even though behind the scenes these companies have long standing support and development relationships.

The cloud seems to make a lot possible these days.

Have a look at my colleague's take of this, Frank Scavo - here - he sees the great detente. And I always enjoy Dennis Howlett's take on this over at Diginomica.