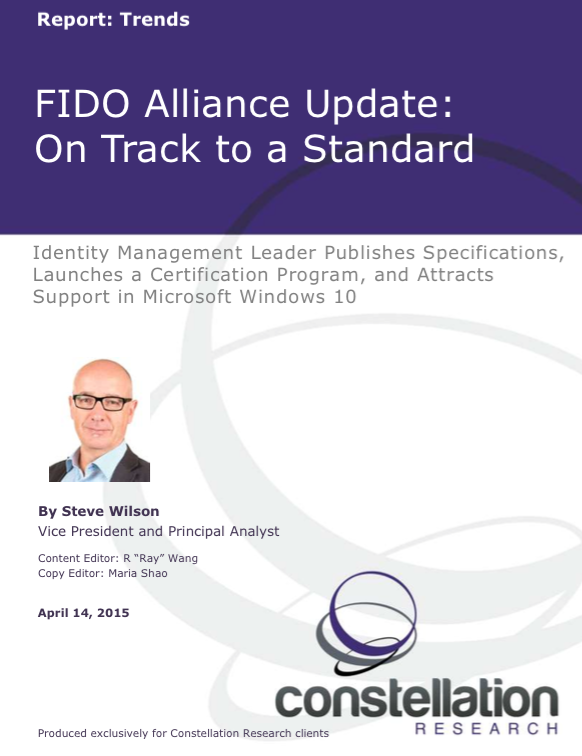 Constellation is the only research firm covering the advances of the FIDO Alliance.

The FIDO Alliance is the fastest-growing Identity Management (IdM) consortium Constellation has seen. Comprising technology vendors, solutions providers, consumer device companies, and e-commerce services, the FIDO Alliance is working on protocols and standards to strongly authenticate users and personal devices online. With a fresh focus and discipline in this traditionally complicated field, FIDO envisages simply “doing for authentication what Ethernet did for networking”.

Launched in early 2013, the FIDO Alliance has now grown to over 180 members. Included are technology heavyweights like Google, Lenovo and Microsoft; almost every SIM and smartcard supplier; payments giants Discover, MasterCard, PayPal and Visa; several banks; and e-commerce players like Alibaba and Netflix.

FIDO is radically different from any IdM consortium to date. We all know how important it is to fix passwords: They’re hard to use, inherently insecure, and lie at the heart of most breaches. The Federated Identity movement seeks to reduce the number of passwords by sharing credentials, but this invariably confounds the relationships we have with services and complicates liability when more parties rely on fewer identities.

In contrast, FIDO’s mission is refreshingly clear: Take the smartphones and devices most of us are intimately connected to, and use the built-in cryptography to authenticate users to services. A registered FIDO-compliant device, when activated by its user, can send verified details about the device and the user to service providers, via standardized protocols. FIDO leverages the ubiquity of sophisticated handsets and the tidal wave of smart things. The Alliance focuses on device level protocols without venturing to change the way user accounts are managed or shared.

The centerpieces of FIDO’s technical work are two protocols, “UAF” and “U2F”, for exchanging verified authentication signals between devices and services. Several commercial applications have already been released under the UAF and U2F specifications, including fingerprint-based payments apps from Alibaba and PayPal, and Google’s Security Key from Yubico. After a rigorous review process, both protocols are published now at version 1.0, and the FIDO Certified Testing program was launched in April 2015. And Microsoft announced that FIDO support would be built into Windows 10.

With its focus, pragmatism and membership breadth, FIDO is today’s go-to authentication standards effort. In this report, Constellation looks at what the FIDO Alliance has to offer vendors and end user communities, and its critical success factors.

This is the latest update to Constellation’s continuous coverage of the FIDO Alliance. Each new report retains sufficient background so newcomers can quickly get up to speed with the Alliance, its objectives and its work, and presents our analysis of the most significant developments in use cases, applications and the membership. The earlier reports were: