Facebook’s evolution continues; toilet-flushing cat lovers have found Pinterest and the selfie-addicted seem to have moved on to Instagram (albeit it not as fast as many of us wish). So what’s next for Facebook? What’s the next big trend among the next generation, among Millennials?

Back in September 2013 Pew Research released a report that suggested most people are not comfortable with political conversations on Facebook. Fast forward almost two years and things have changed dramatically.

Last week, eMarketer reported on a study based on research by GfK for Harvard University Institute of Politics that shows the next generation has adopted Facebook as its preferred social network for sharing their political ideologies.

“When the study asked US millennial internet users about their digital political activities, respondents were most likely to have signed an online petition. However, the next four most popular responses all related to Facebook actions, as those with an account reported “liking” a political issue (30%) or candidate (24%) on Facebook, as well as using the social network to advocate for a political position.”

The report when on to list the massive popularity of Facebook as a political platform for the rest of the population as well, citing a report by ShareThis that indicated 71% of US internet users chose Facebook as their preference to share or comment on the 2014 midterm elections.

What’s even more interesting is the fact that the popularity of politics on social media seems to be focused on Facebook specifically; neither Millennials nor political pundits listed Twitter as a preferred network for political campaigning.

Indeed, Facebook’s “Like” button is the next political support button. According to the online publication, The Record, delegates at a recent Conservative political convention in Canada found one quarter of the educational sessions provided by the party were focused on digital engagement with voters.

Columnist Stephanie Levits suggests that while data science has always been important for politicians, Facebook has taken it to another level. “Facebook can match voter lists gathered by parties to Facebook users and then target just those users with particular ads, and go even further by taking those profiles and looking for users who are similar, and help politicians blast them with ads as well.”

There doesn’t seem to be an end to the growth of political conversations on social media.  Google research data indicate that a typical voter will make 14.7 online attempts to gather information about political issues before deciding how to vote or for whom to vote.

My mother always said that religion and politics are not polite conversation at social events, yet somehow Facebook has embraced politics and religion as popular fodder for our collective digital/social conversations.

There’s certainly two camps in this discussion; more and more people are turning to Facebook to support their political affiliations yet there’s a growing frustration with politics in Facebook conversations. 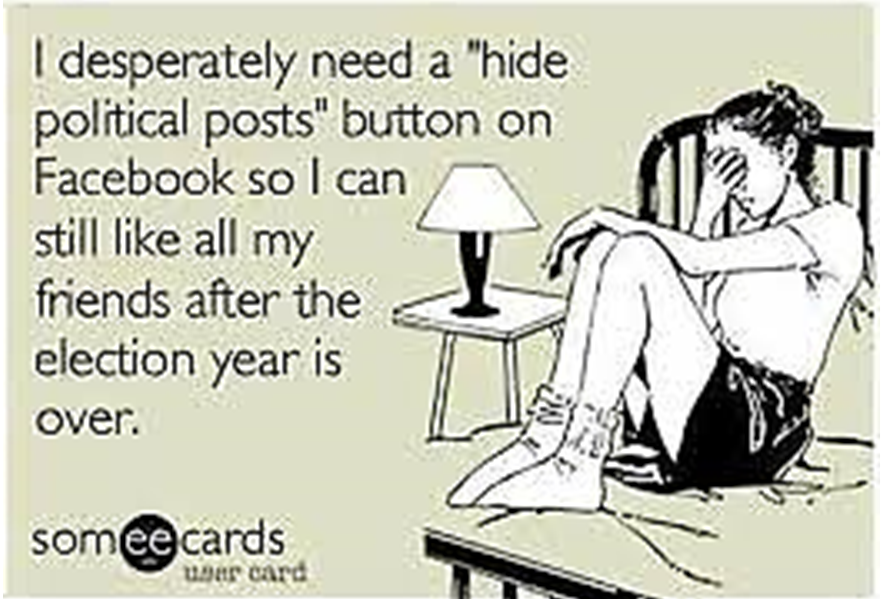 Sam Fiorella
Feed Your Community, Not Your Ego