There is no shortage of City Authorities sponsorship, nor engagement support from the big technology vendors, plus a mass of ‘new’ Smart technology products from startups, but there is a missing ingredient; the vision to create a Business Service architecture to transform the parts into a commercially, technically and deliverable viable Smart City.

The previous post ‘Smart Cities are Ecosystems of IoT enabled Smart Services on a Sophisticated Infrastructure. So why does the focus always seem to be on a product?’ addressed this question. The answer was framed by the commercial requirements for large-scale investment necessitating leading Technology vendors to have to ‘lead’ their involvement around a product sale. Smart Cities need to gain the involvement and support of their increasing Smart Citizens who already use a wide selection of Apps in their cities.

The creation of the 21st century Smart City using IoT technology to connect and integrate its citizens and commerce to producing wealth and cultural richness echoes many of the challenges of the 19th century creation of Industrial Cities driven by the rise of manufacturing. With out city planning, to bring investment in the basic infrastructure of roads, railways, water, gas, even with time electric power, little could be accomplished.

In 21st century Smart Cities the focus on building a wealth enabling infrastructure is necessary, but if this provides no value creating capabilities that citizens and business are prepared to pay for, then the investment will produce no tangible return.

The 19th century industrial city could not have flourished without city planning starting with a physical ‘architecture’ of the fabric of the city. The city architecture enabled a mass of activities by companies and citizens starting from building plots with utility services through to providing transport services to get workers to and from employers. Our 21st century Smart Cities are very little different in needing an architecture to allow citizens and business to ‘build’ their activities and operations, albeit virtually a technology architecture rather than a physical one.

The Smart City vision can seem more 20th century driven in using IT Technology based centralization for cost reduction, rather than the 21st vision of de-centralization for value creation. Smart Cities have to engage with their Citizens and Businesses who have already started using Smart Services and have expectations as to how their City will become ‘Smart’ and value creating.

The blog defining a Smart City by means of the Smart Services used by Smart Citizens using IoT for Business disruption and Service level improvement through Decentralization explored the citizen/business role in more detail. The following diagram appeared in the blog previously mentioned on Smart City Ecosystems relating the standard three zones of IoT solutions to a Smart City. Real-Time ‘read’ data coming sensors on the left side to feed ‘react’ Smart Services in the center whilst City Analytics are on the right. It is the Smart Services in the center zone that are the critical ‘high value’ success factor that kick starts new data flows and produces the revenue support Smart City operations. 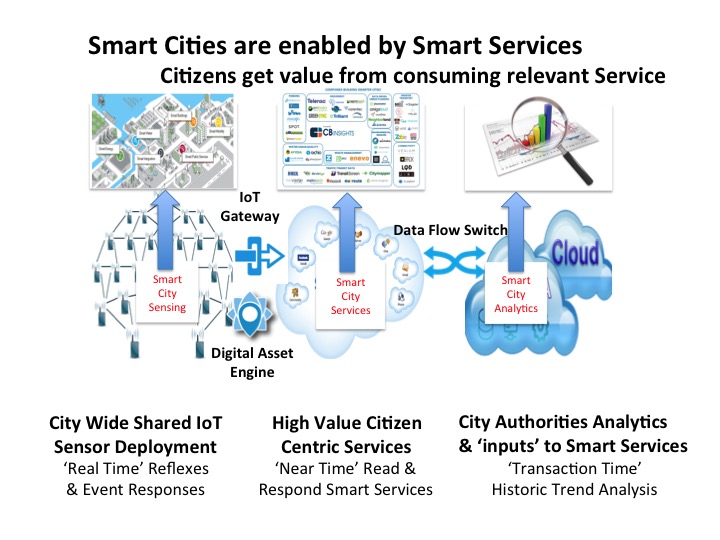 In this model the case for infrastructure investment is relatively straight forward; starting with the need for improvements in networking capacity to support increasingly levels of traffic. However, the traffic formats and patterns can be very different to those experienced in IT Networks as thousands, rising quickly to hundreds of thousands of IoT sensors communicate in very, very small data packets through constantly shifting data patterns driven by events rather than the planned activities familiar in IT.

Edge, or Fog, Computing models are a significant feature of Smart City network design, together with new protocols involving Gateways. Local events, produce localized reactions, CityMapper, Uber, or any of the other Smart Services, that have generated huge take up from Citizens, (in the limited number of towns in which they are available), all create localized traffic patterns. More particularly they require Cellular networks to merge seamlessly with Wireless and Wired networks.

The all-important Smart Services don’t only require high bandwidth connectivity they probably will require a localized cloud-hosting provision. There are many commercial hosting companies ready to provide the necessary capabilities, but the Smart City management may wish to sponsor a local hosting company as part of creating new localized business growth.

City ‘planning’, or Governance, is required to ensure the creation, and ongoing success, of a City App Shop. Citizens and visitors will expect a single link to take them to the selection of Smart Services that can be downloaded to offering localized unique value to life in the Smart City, with the focus on businesses, citizens and visitors.

Data, or Information, is at the heart of all of this, and introducing data flows into the conceptual architecture, (shown in the following version of the diagram), brings the Smart City Infrastructure to life. The diagram is larger this time to be able to read what each arrow representing a data flow indicates.

The use case illustrated is a citizen request to ‘Find me a Parking Space’ in a given area of the city selected as the destination. This requires a ‘real time’ continued optimization of the ever-changing situation in respect of parking availability and traffic conditions during the journey using Smart Service interactions and shared access to IoT Sensors.

Opening the App ‘Find me Parking’ from a Smart Phone, or direct from an Internet Connected car, starts a search using IoT parking bay sensors, and perhaps older systems using in/out counting of capacity. The results are placed in order of proximity to required location whilst an interactive Service-to-Service API call is made to the traffic App for route information. The overlay of traffic congestion is used to reassess the best parking choice using total travel time, traffic plus walking, to destination.

Smart Services are not just about finding a static answer when the question is posed, but will continue to actively maintain a best choice through out the journey in respect of dynamic changes in parking bay availability and traffic conditions.

Clearly these types of localized Smart Services providing a new generation of ‘real time’ choice are a very popular element to any Smart City, but more importantly they are largely self-funding. Already those that are established in the major cities of the World gain income from a mix of subscription, advertising, and sponsorship, (e.g. parking companies in the example). What is required is for a proposed Smart City to encourage their participation with infrastructure and the supply of local data on which to build their service.

Citizen targeted Smart Services provide City Administrations with an entirely new source of data about how people, and business, which live in their city, use its faculties. For the first time data as where citizens travel from and go to for parking in relationship to traffic congestion is not only available for planning, but for real-time traffic management of traffic lights, smart signs etc.

A Smart City is more than the ubiquitous connectivity of ‘things’ it is the ability to use ‘real time’ responsiveness to understand how everyday activities can be made to function better, both for the citizen and for the City Administration.

City Administrations already have access to huge amounts of data and deploy extensive data analytics. However this data is almost without exception historic, even if only by a few days, and collected from more limited traditional sources.

Historic data forms the basis for strategic analysis and planning, but adds little, if anything to tactical ‘real time’ improvement of everyday operations. It cannot drive continuous interactive changes in traffic signaling using not only traffic congestion monitors but also drivers intended routing.

The coverage and type of data provided from Smart Services and directly linked city sensors is at the heart of the break through in more efficient City operation. Efficiency is directly linked to optimization of real situations and events, such as a broken down bus, both requiring a replacement and introducing a localized traffic jam. Historic data analysis provides strategic planning optimization, but real-time data drives tactical optimization.

Many IoT Sensors and their attached functions will need to be accessed by both the City and multiple Smart Services providers. Each provider cannot, and will not, want to add their own sensor and connection to monitor each and every car park bay, any more than the placement of sensors on the city metro system would be allowed by multiple private companies.

Sensor data needs to be widely shared requiring ‘directory’ information as well as security control as a generally unforeseen infrastructure requirement. Centralized aggregation of ‘event’ data with some type of forwarding structure immediately removes ‘real-time’ responsiveness, as well as introducing a huge centralized overhead that will be difficult to scale.

Smart City projects such as Manchester Verve have realized this, and incorporated an Asset Mapping directory for the registration of IoT Devices and sensors into the enabling Infrastructure project. The importance of making it possible to search for IoT Assets by Developers for incorporation into Smart Services, the management of the shared Asset itself, the need for security, are, with other operational issues, explored in the blog ‘the challenge of the final mile’.

The so called ‘Final Mile’ connectivity and operational management of IoT Devices and sensor is for many IoT and Smart Services projects the make or break success factor. The Final Mile is by definition a decentralized environment that depends on both scale, and diversification, for success, it must be addressed in Smart City Architecture, just as in a previous generation of city governance.

This blog can only outline the issues faced, and the case for Smart City architecture, by encouraging the recognition of the usually less recognized elements to be addressed in developing a fully functional vision. A Smart City Architecture is merely the extension of the good city governance developed during previous generations of growth to include the technology age.

When a city has autonomous ‘Smart’ responsiveness to the events and activities of its Citizens, its wealth creating Business, together with optimization in provisioning its own Services, then it has become a Smart City.

However traditionally City Administration has been concentrated on the provision of infrastructure, and this, together with the challenge of technology and culture change,  makes it difficult to construct, and manage, the project with the necessary integration of a new generation of Smart Service providers that are crucial to success.

New C-Suite
Stay up to date with the latest disruptive technology.