Why is email so popular? Because it works. If you know someone's email address you can send them a message. It does not matter which email system they use, what client they use, what device they use, where they are in the world, etc. Anyone can email anyone else. However, that ease of use also enables the issue with email, its misuse for scenarios better suited to other tools. Contrast this to social networking, where the only people that can communicate with each other are people in the same network. Within a company social networking is great. Employees can communicate, collaborate and coordinate with any of their colleagues, because they are all using the same tool. But what happens when you want to bring in someone from the outside like a customer or a partner? Typically that requires giving them an identity and password on your system. That raises all sorts of security, administration and licensing issues. It's also a pain for the user, because it means yet another ID/PW on yet another system to remember. Now multiply that over and over again by the number of external connections and you quickly see why social networking has some serious hurdles for adoption with external participation.

Slack is hoping to 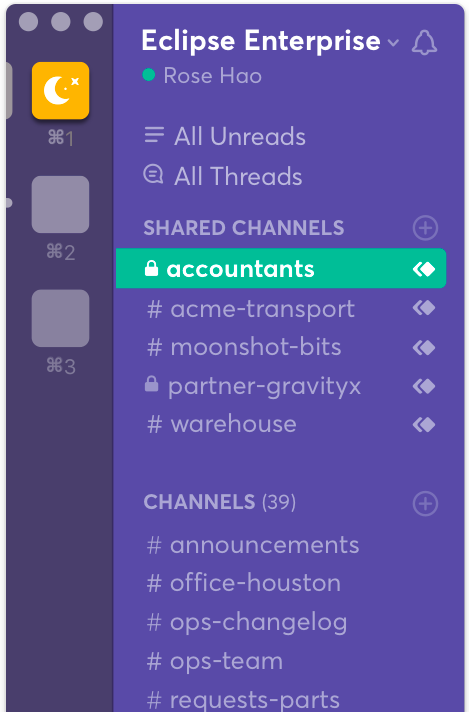 improve this situation using what they called Shared Channels. This feature allows two companies (who are both already paying for Slack) to communicate with each other using a channel that spans across the two different companies. So say Company A uses Slack and they want to connect with their customer Company B (who has to also be using Slack), they can create a shared channel that employees in both companies can use. This is much better than Company A having to create, manage and pay for IDs and PWs on their system for Company B's employees.

In Sept 2017 Slack announced (the beta of) Public Shared Channels, which allow anyone in Company A and Company B to join a shared conversation. Today Slack announced (the beta of) Private Shared Channels, which also allow two Slack customers to bridge their organizations, but in this case the channels are hidden, and administrators need to invite members to join. I think this will be a far more common use case than public shared channels, as most cross-company conversations are better suited to a limited audience.

It's important to note that Slack's shared channels are currently not available for Enterprise Grid customers. I hope this is rectified soon, as this feature will become increasingly important as large enterprises try and improve adoption of social tools.

Shared Channels are a great step in the right direction towards making social networking easier across organizations. But don't forget, this is just for Slack customers. Each social networking tool (Slack, Cisco Spark, Google Hangouts, Workplace by Facebook, etc, etc, etc) is still its own silo, unlike email where anyone can communicate with anyone else. Until social networking supports cross product communication (which may never happen), communicating with people that use a different products will remain a challenge.