On October 14, 2013 Siemens Enterprise Communications changed its name to Unify. The company believes this new name more accurately describes what the company is all about: unifying how people communicate and interact. The new brand is accompanied by a new tag line: Harmonize Your Enterprise. 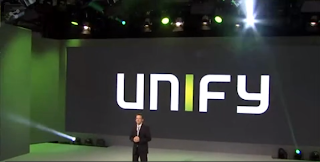 The rebranding of the company is not a surprise. When Siemens AG entered into the joint venture with Los Angeles-based Gores Group to operate Siemens Enterprise Communications, part of that deal was that the company could use the Siemens brand for several years but that it would ultimately have to discontinue using the Siemens moniker. That day has arrived.

Unify is working hard on a new flagship solution code named Project Ansible. Project Ansible is a software solution that is designed to bring people together by integrating communication channels and devices into a single, seamless experience. One of the hallmarks of Ansible is its reliance on an as yet unproven, unratified (from a standards perspective) voice, video and data technology called WebRTC. Anisble will become available in July 2014 and it will be offered as a cloud-based solution running out of Unify data centers.

Unify’s CEO, Hamid Akhavan, said, “In the past, we have come from a telephony background… that is no longer our focus.” This seems to indicate that Unify will move away from being a traditional PBX manufacturer and caused me to question Unify’s strategy going forward.

Chris Hummel, Unify GM and North American Commercial Officer followed up on this comment the next day with a clarification. Hummel stated that Unify has incredible strength in voice and telephony. They are not throwing this strength and experience away, and they are not getting out of the PBX market. But voice is now table stakes. A very sophisticated table stakes, but table stakes nevertheless. Historically Siemens has been focused on ports and selling what connects to those ports (primarily phones). Under the Unify brand, they will be focusing on people, not ports. Customers are putting more value on the applications and their usage, and Unify is listening to its customers by creating the applications customers want. This is where Unify is going, effectively becoming a trusted advisor and counselor to its customers.

My Point of View

From a technological standpoint, Ansible looks outstanding. That being said, Siemens has long been a thought leader with respect to integrated communications and collaboration capabilities. For example, OpenScape was way ahead of its time (I mean the OpenScape UC client), and I actually think it is the top UC client on the market. Nevertheless, it seems like the market has not recognized Siemens’ integrated communications and collaboration achievements through buying its UC solutions in large numbers. How will Ansible be different? I know the analyst presentation Siemens used for presenting Ansible said that a lot of market research has been done with respect to Ansible’s capabilities and that is why Siemens has launched the project.

But, why will this make a difference to the market? What Siemens/Unify has not articulated in my mind is a good explanation of the go-to-market strategy along with what will be different with the Ansible go-to-market play versus earlier efforts promoting some great Siemens technology that frankly didn’t get bought. As I have thought about Ansible, it also seems to me that only a small fraction of the enterprise market will be able to take advantage of the integrated capabilities Ansible will provide (integrated communications, social, collaboration, etc.). So will the sales be sufficient to justify the initial and continued development.

I have asked Siemens/Unify how many of its existing customers have committed to buy Ansible once it comes out and whether there were any firm commitments. I asked this because Siemens’/Unify’s customer base is a friendly group of prospects for this product, and if they do not buy, then I don’t see how Ansible will nudge the broader communications market where it will have to compete in an unfriendly, highly competitive enterprise communications market share slugfest.


Another question I’ve had for Siemens/Unify is whether Ansible could be spun off to become its own entity. One of the issues with OpenScape UC client is that even though it *could* work with other PBX environments, it was and is tightly linked, at least from a sales perspective, to the Siemens PBXs. Anisble has this same heritage, and even though it is supposed to work with other PBXs, will the legacy Siemens/Unify legacy bog it down like it did OpenScape? If Ansible was spun off into another entity then it could compete independently of the Siemens/Unify PBX.

With respect to the branding change to Unify, the company needs to articulate why a rebranding exercise and vision/strategy change will help it increase sales and gain market share. Just changing the name is interesting but has little market value.

So time will tell if Unify and Ansible really are the way of the future in the enterprise communications and collaboration market. One thing I do credit Siemens/Unify management with is the courage to try to do something really unique and different rather than just plodding along like some of its competitors are doing.