With SAP being a global company it has regional editions of the Sapphire and TechEd events. For anyone following the company it's always a key question if the follow up events to the traditionally leading North American event, are pure repeats - or if there are more or less fine tuned changes.

For this year's edition of the TechEd developer conference it was more or less same same between Las Vegas and Amsterdam - but the event in Bangalore was an event by itself. There is a lot to digest from this TechEd - that just started today - December 11th - and will go until December 13th.

So let's start with what I thought was the most interesting and important part to see if it had changed from TechED in Las Vegas and Amsterdam - and the good news is - it has not changed, the picture is still very much the same: 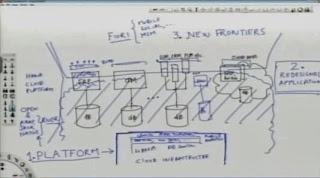 Wedged between HANA the database, running on the HANA cloud platform are a number of different applications - to which Fiori is the front end. And while this is easy to draw and compelling to explain - it has massive repercussions for SAP customers, SAP partners and SAP itself. More to come in a separate post, hopefully soon.

Takeaways from the press release

So let's dissect and comment on the key pieces of the press release:

This was certainly the big news - SAP (once again) creates its own development environment and language with SAP River. For those watching SAP long enough, developer productivity was the key reason ABAP was created in the first place and kept in place (ironically it was Shai Aggassi at an event in Bangalore saying that ABAP would be around for a long time, because its so productive) till today.
We will have to see much more of River if that really merits the case - my general view (for now) is - the world (and developers) do not need another development language and environment.

OpenUI5, Open Source Variant of the SAPUI5, for the Developer Community
SAP is contributing key portions of its SAPUI5 framework as open source code on the GitHub site under an Apache Version 2.0 license. As part of the effort, SAP has developed different themes, framework features and control libraries to help provide a consistent end-to-end experience and foster reuse and efficiency, for example, via responsive layouts. - See more at: http://www.news-sap.com/sap-increases-focus-on-developer-experience-and-...

This was widely popular by the audience and in social media. And in general it's positive when large tech vendors contribute to open source and put muscle and investment behind it. But usually they take a lot from open source and then contribute to the project with some fraction of investment. OpenStack is a prominent example for that. But in SAP's case with SAPUI5 - now OpenUI5 - SAP is the only contributor - and the question is, who will collaborate and invest into it and into which areas. If there was someone, SAP should have had them  on stage and in this press release.
Another potential red flag are the details on what SAP will keep and not contribute - something that wasn't communicated as I wrote this (yet).

Long awaited and now it's there - and good move for HANA - the database. With the new River SAP is competing with Cloud Foundry as a platform for developers to build next generation applications on. I am sure SAP and Pivotal will separate that by the type of applications you can build with each platform - but the partnership with Pivotal becomes now more of a database partnership than anything else.

This goes along the same lines as the previous paragraph on CloudFoundry - only here SAP does really good to open source in the sense that a tech giant contributes (and maintains presumably) an open source framework's usage (in this case the popular node.js framework) as part of a much larger open source project. Of course with the interest of more node.js projects uptaking HANA as the database - but that is a very legitimate motivation for SAP. Well done.

New Beta Version for SAP PowerBuilder
A new closed beta version of the SAP PowerBuilder application development tool is intended to support new operating systems, databases and open standards and is planned for limited availability on December 15, 2013. SAP is committed to innovation without disruption and with the new beta release, beta customers can use their current investment in applications, knowledge and skills while they take advantage of new SAP innovations.

With the Sybase acquisition SAP also acquired one aging, but prominent application development platform, the leader of RAD race of the 90ies, PowerBuilder. It's good to see that SAP keeps investing into the product - as there are still a lot of clients out there running applications on PowerBuilder. If I understood Reh correctly, PowerBuilder will be able to generate SAP River RDL code and thus become a code and (hopefully for SAP) a developer hands contributor. If that will work out - we will see - but it's good to see, that SAP leverages all developer assets and  mind share it has to its disposal to get River off to a running start.

Easy Access to SAP Technology
A unified developer license covering all major platforms and technologies significantly simplifies the developer experience and makes it easy to get access to key SAP technologies.

Always good to simplify licensing for developers - the details will have to be hashed out. But given that it looks like Schmerder created and updated it - I am pretty confident it's the best that SAP was able to do at this point. Others will dissect and find the issues.

As we talk about rivers and the event was in India - not surprisingly there an Indian River inspiring a new codename - the Ganges. And SAP Ganges is the latest attempt of SAP modelling the commerce happening between its customers. Remember SAP tried in the dot com boom era with SAP markets - and wasn't that successful - but with the Ariba and hybris assets in house, it's well worth it to give it another try. It looked like Mondkar annunced it's development roadmap for Ariba till Sapphire in June 2014 - let's see what we hear and see between now and then. SAP Mentor Dick Hirsch has written a great first take here.

And then Fiori is making progress, progress it needs to make as it was recently (TechEd in Las Vegas) declared as the one and only SAP UI going forward. For that it needs to gain capabilities way beyond it's self service user interface origins - and the demos of the sales forecast and manufacturing planning are encouraging - but there is a lot more that needs to happen for a professional user's user interface, powerful enough to be the user interface from 9 to 5 plus overtime.

It's good to see SAP courting developers, but so is everyone else. If I put my developer hat on and compare the TechED messages with the ones I heard at Google I/O, Microsoft Build, VMWorld, Oracle's JavaOne, AWS re:invent and Salesforce's Dreamforce in the last 6 months - then SAP and River have their work cut out. All these vendors court the enterprise developers and have larger developer ecosystems than what SAP has ever had control over. Valiant to scramble Powerbuilder folks and kudos for supporting it - but that will not give SAP critical mass.

If SAP e.g. had announced support for the super popular docker both to build on and to deploy on HANA - I am pretty sure it would have garnered (even) more attention and ultimately - more apps running on HAN,A.

But then SAP is the largest business application vendor and certainly can try to attract developer masses into its proprietary architecture - that's the control ultimately all enterprise giants want to have. But Salesforce.com struggles and ultimately little success with Apex show that the proprietary path SAP seems to be taking with River is a very challenging path to success. But never say never. I have lots of respect for Klein and team.