At CIS 2013 in Napa a year ago, several of us sensed a critical shift in focus amongst the identerati - from identity to attributes. OIX launched the Attributes Exchange Network (AXN) architecture, important commentators like Andrew Nash were saying, 'hey, attributes are more interesting than identity', and my own #CISnapa talk went so far as to argue we should forget about identity altogether. There was a change in the air, but still, it was all pretty theoretical.

Twelve months on, and the Attributes push has become entirely practical. If there was a Word Cloud for the NSTIC session, my hunch is that "attributes" would dominate over "identity". Several live NSTIC pilots are all about the Attributes.

ID.me is a new company started by US military veterans, with the aim of improving access for the veterans community to discounted goods and services and other entitlements. Founders Matt Thompson and Blake Hall are not identerati -- they're entirely focused on improving online access for their constituents to a big and growing range of retailers and services, and offer a choice of credentials for proving veterans bona fides. It's central to the ID.me model that users reveal as little as possible about their personal identities, while having their veterans' status and entitlements established securely and privately.

Another NSTIC pilot Relying Party is the financial service sector infrastructure provider Broadridge. Adrian Chernoff, VP for Digital Strategy, gave a compelling account of the need to change business models to take maximum advantage of digital identity. Broadridge recently annoucned a JV with Pitney Bowes called Inlet, which will enable the secure sharing of discrete and validated attributes - like name, address and social security number - in an NSTIC compliant architecture.

Yesterday I said in my CISmcc diary that I hoped to change my mind at #CISmcc about something, and half way through Day 2, I was delighted it was already happening. I've got a new attitude about NSTIC.

Over the past six months, I had come to fear http://www.nist.gov/nstic/">NSTIC had lost its way. It's hard to judge totally accurately when lurking on the webcast from Sydney (at 4:00am) but the last plenary seemed pedestrian to me. And I'm afraid to say that some NSTIC committees have got a little testy. But today's NSTIC session here was a turning point. Not only are there a number or truly exciting pilots showing real progress, but Jeremy Grant has credible plans for improving accountability and momentum, and the new technology lead Paul Grassi is thinking outside the box and speaking out of school. The whole program seems fresh all over again.

In a packed presentation, Grassi impressed me enormously on a number of points:

Just one small part of NSTIC annoyed me today: the persistent idea that federation hubs are inherently simpler than one-to-one authentication. They showed the following classic sort of 'before and after' shots, where it seems self-evident that a hub (here the Federal Cloud Credential Exchange FCCX) reduces complexity. The reality is that multilateral brokered arrangements between RPs and IdPs are far more complex than simple bilateral direct contracts. And moreover, the new forms of agreements are novel and untested in real world business. The time and cost and unpredictability of working out these new arrangements is not properly accounted for and has often been fatal to identity federations. 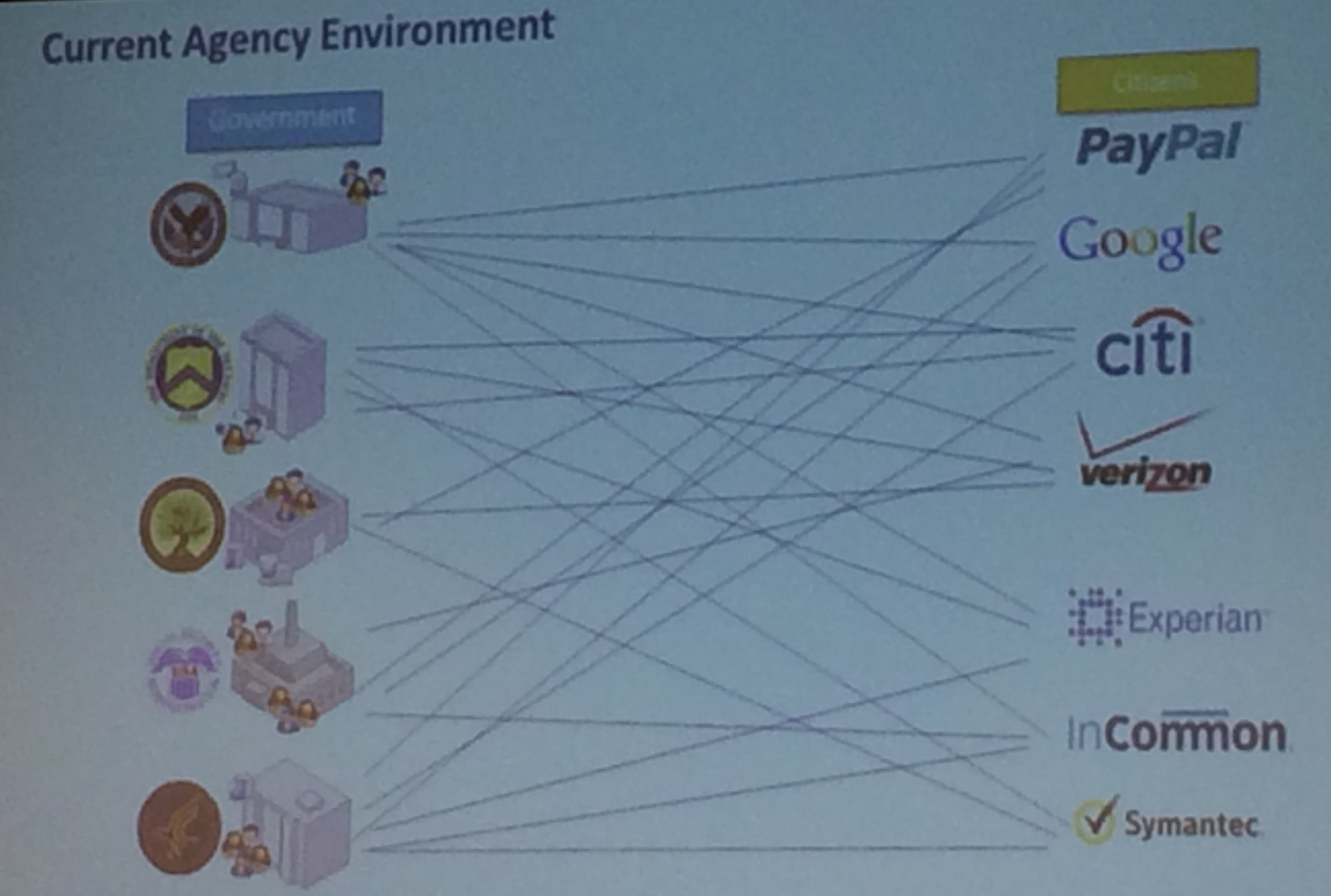 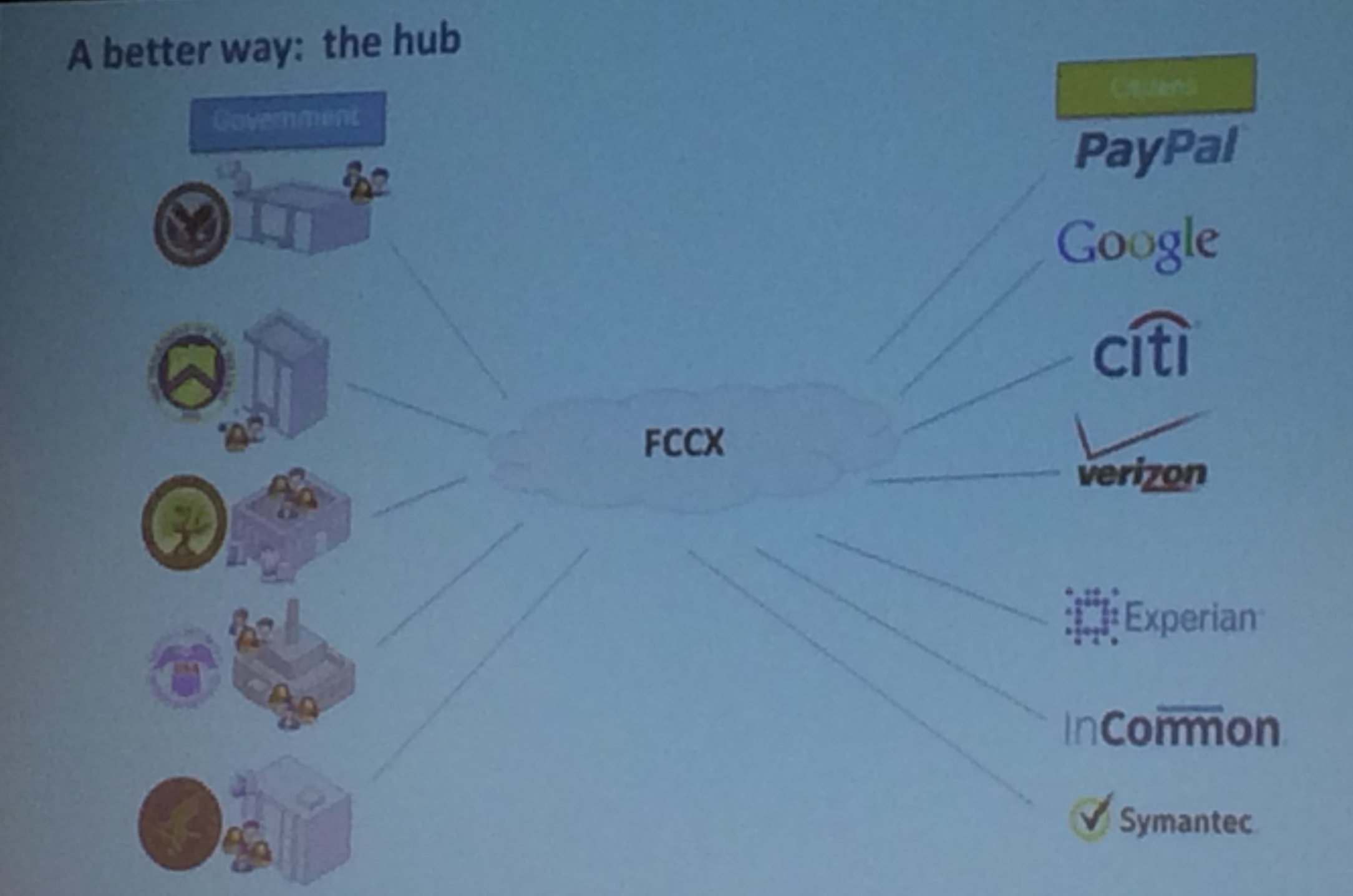 The dog barks and this time the caravan turns around

One of the top talking points at #CISmcc has of course been FIDO. The FIDO Alliance goes from strength to strength; we heard they have over 130 members now (remember it started with four or five less than 18 months ago). On Saturday afternoon there was a packed-out FIDO show case with six vendors showing real FIDO-ready products. And today there was a three hour deep dive into the two flagship FIDO protocols UAF (which enables better sharing of strong authentication signals such that passwords may be eliminated) to and U2F (which standardises and strengthens Two Factor Authentication).

FIDO's marketing messages are improving all the time, thanks to a special focus on strategic marketing which was given its own working group. In particular, the Alliance is steadily clarifying the distinction between identity and authentication, and sticking adamantly to the latter. In other words, FIDO is really all about the attributes. FIDO leaves identity as a problem to be addressed further up the stack, and dedicates itself to strengthening the authentication signal sent from end-point devices to servers.

The protocol tutorials were excellent, going into detail about how "Attestation Certificates" are used to convey the qualities and attributes of authentication hardware (such as device model, biometric modality, security certifications, elapsed time since last user verification etc) thus enabling nice fine-grained policy enforcement on the RP side. To my mind, UAF and U2F show how nature intended PKI to have been used all along!

Some confusion remains as to why FIDO has two protocols. I heard some quiet calls for UAF and U2F to converge, yet that would seem to put the elegance of U2F at risk. And it's noteworthy that U2F is being taken beyond the original one time password 2FA, with at least one biometric vendor at the showcase claiming to use it instead of the heavier UAF.

Finally, today brought more fresh use cases from cohorts of users we socially privileged identity engineers for the most part rarely think about. Another NSTIC pilot partner is AARP, a membership organization providing "information, advocacy and service" to older people, retirees and other special needs groups. AARP's Jim Barnett gave a compelling presentation on the need to extend from the classic "free" business models of Internet services, to new economically sustainable approaches that properly protect personal information. Barnett stressed that "free" Has been great and 'we wouldn't be where we are today without it' but it's just not going to work for health records for example. And identity is central to that.

There's so much more I could report if I had time. But I need to get some sleep before another packed day. All this changing my mind is exhausting.

identity, cloud identity summit
Stay up to date with the latest disruptive technology.