This blog post looks at Oracle Autonomous JSON Database's impact on developer productivity and how the new offering can boost a key developer satisfaction driver: velocity.

Why Does Developer Velocity Matter?

The overused headline "Software Eats the World" usually omits the fact that a lot of developer "blood, sweat and tears" are behind the software that powers enterprises' next-generation applications.

And as the demands for building more software ramp up, the complexities of the associated technology stacks grow even faster. Luckily, there is more training and learning available for developers; unfortunately, though, there is typically less training time available. Today, it is important to understand that the creation of the DevOps function has not insulated developers well enough from nonproductive work. Simply put, DevOps teams are as overwhelmed as developers in trying to keep the software-powered revolution going. Meanwhile, legions of developers have come to understand that when they cannot learn new technologies on the job, they need to learn new capabilities on their own time and dime. And while some of that gives developers the much-needed freedom to explore, learn and tinker, it may constrain their long-term marketability.

At the end of the day, what matters is how fast developers can provide good code that aligns with both the specification and the performance requirements of the application in production. The concept of developer velocity is a relatively new term, but it aptly describes the demand that is now put on developers. Meanwhile, it is important to understand that developer velocity is situational and is based on experience, training, know-how and general talents. So, developers who strive to remain good, or even become better, are pressed to increase their maximum velocity with additional training and education (see Figure 1).

Finally, the key determinant of developer velocity is the time available to code. The more time that developers have to write, review and test code, the more productive code they can deliver. For decades, the focus has been to improve developer productivity when they code. And that is a key factor, but even more potential can be derived by giving developers more time to code. This means the elimination of noncoding tasks. Associated noncoding time spent needs to be examined and, ideally, reduced to a minimum.

One of the key perils of the developer job is that when new technologies are involved in a project, the developers often become the first ones in an enterprise to master the operation of the overall technology. That is natural, as they deal with the technology first and—initially, at least—the most. Unfortunately, though, all too often they are drawn into long-term managing, maintaining and scaling operational tasks around the technology of their projects. Developers too often step into the "experience trap"—the capture of the most experienced resources on operational tasks keeping them from their real job: writing and reviewing code.

And while developers are obliged to do their part to not get caught in the perils of the developer job or the experience trap, their enterprise also has to empower them to use platforms that avoid both challenges, through inherent capabilities. Recent innovation in the self-driving or autonomous product category makes this possible.

What Is the Oracle Autonomous JSON Database Service?

Specifically, Oracle Autonomous JSON Database is a cloud service that addresses the JSON developer community. It uses native JSON storage and is a fast and scalable service, using Oracle Cloud Infrastructure (OCI). Most importantly, it allows use of both non-SQL, document-centric code assets and SQL-centric code assets, and it provides simple document APIs for programming languages via REST or the command line interface. Contrary to widespread expectations regarding an Oracle Database product/service, SQL is not required to use the Autonomous JSON Database (see Figure 2). 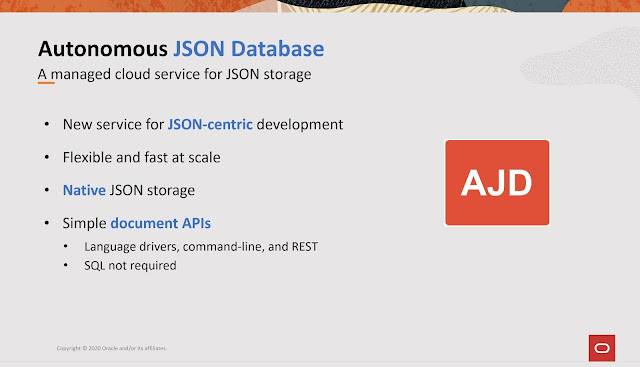 There have been long debates regarding the right way to access document-centric JSON databases. Oracle is taking a balanced approach, allowing developers to access the Autonomous JSON Database service as they prefer, either with a document-centric language via Simple Oracle Document Access (SODA) or via SQL. 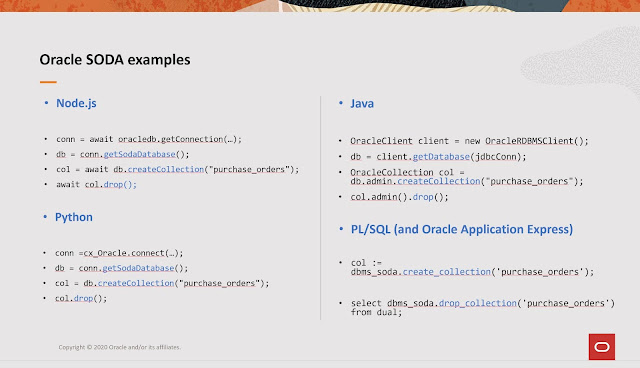 But this is only half the story: The main value of Oracle Autonomous JSON Database is that it runs on Oracle Autonomous Database, which means that it has all the self-driving automation, availability, scalability, elasticity and pay-per-use model of the Oracle autonomous platforms. Oracle provides the availability that enterprises need for their JSON-centric next-generation applications as well as the scalability and elasticity that JSON-native applications need. Practically, this means developers do not have to worry about taking care of database management (new instance provisioning, automated backup, replication, disaster recovery, scaling and tuning, and so on), and with that they can avoid the "talent trap." With little to no DevOps resources and skills needed, developers will not be stuck supporting JSON databases. In these capabilities lie the real advantage for developers using Oracle Autonomous JSON Database: It allows developers to increase time available for developing code, and to spend less time on "plumbing," thus gaining greater developer velocity.

Why It Matters for Developers

Developers want to create and maintain successful code in applications that make a difference for their enterprises. With the Autonomous JSON Database, Oracle delivers four key qualities that improve the developer's experience in this regard (see Figure 4):

1.     Fast ramp-up. Developers can use both SODA and SQL with the Oracle Autonomous JSON Database and mix and match between the two, depending on the use cases. With support for the ISO SQL/JSON standard, and with SODA being close in composition to other popular document APIs, developers can become productive quickly.

2.     Self-driving NoSQL. Oracle autonomous qualities benefit the Autonomous JSON Database. Therefore, auto-scaling, backup, cloning and more are easily achieved. Relieved of such administrative requirements, developers can code with no outage or impact on their applications.

3.     Single database benefits. Oracle's universal database approach brings all relevant information together, not only the relational system of record information on the Oracle Database but also the nonstructured, document-oriented NoSQL data with Oracle Autonomous JSON Database. Developers who understand Oracle Database don't have to learn anything new to use Autonomous JSON Database.

4.     More coding, less admin and ops. To achieve higher velocity, developers need to have more time to code and less time consumed by administrative and operational tasks. Oracle Autonomous JSON Database delivers on that, with all the qualities of the Oracle autonomous technology stack. 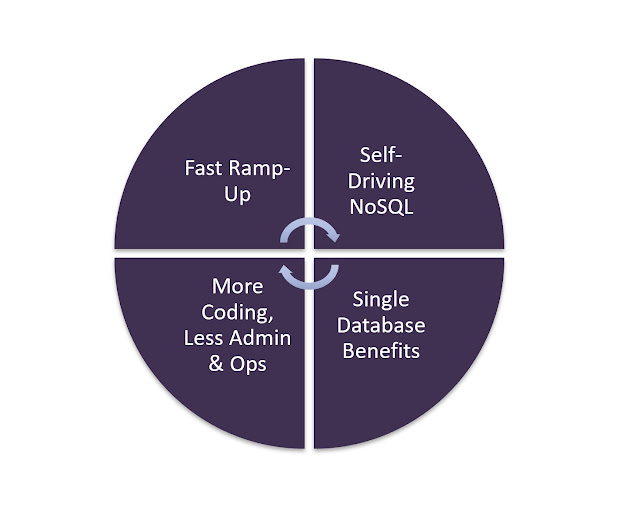 Constellation has the following recommendations for developers regarding Oracle Autonomous JSON Database:

1.   Accept the automation imperative. Progression in technology, most notably Infinite Computing,[i]allows the automation of more routine and advanced tasks than ever before. Developers need to realize that their work environment will change more in the next 10 years than it has changed in the last 25. Developers who take advantage of autonomous self-driving capabilities earlier will increase their developer velocity and be more successful.

2.   Evaluate Oracle Autonomous JSON Database for NoSQL demands (existing Oracle customers). Suite-level benefits are strong, especially when it comes to the platform-as-a-service (PaaS) layers (in this case, the database). If a developer is already using the Oracle Database, then the synergistic effects of the Oracle platform make Oracle Autonomous JSON Database very attractive.

4.   Prioritize developer velocity. As Enterprise Acceleration[ii]is travolging[iii]enterprises, developers find themselves as the key enablers of the software-driven enterprise. Developers who can show higher velocity than their peers will do better.

Developers need to think more about themselves, even to the point of becoming selfish. Technology advancement has accelerated, and the expertise and learning options available a few years ago are no longer keeping developers skilled to the level where they want to be and should be.

At the same time, days have not gotten longer than 24 hours, so it really is up to developers to determine how they can get the most out of their time. Adding more admin/ops skills is not the best choice. It is true that new technologies are always interesting and often fun to learn with, tinker with and even build software with. But, all too often, developers get stuck with operating and maintaining these technologies longer than they should, and they really cannot afford to waste time on supporting technologies that could be automated or that should be supported by others. (DevOps, anyone?)

This realization makes developers effective change agents for their work environment. That is not a new role, as developers have that freedom when it comes to the tools they want to use when they code (e.g., their IDE). But the change-agent role now needs to expand to platforms that do not require developers to be taken "hostage" by platform maintenance and operation needs. The consequence is that developers need to become more active in selecting platforms, something they have not done traditionally.

The good news is that new, modern platforms inherently avoid pitfalls that burden developers with operational, administrative and maintenance demands. One such modern offering is Oracle Autonomous JSON Database, which minimizes operational and maintenance demands on anyone—whether they are developers or DevOps staff. The result of using platforms with autonomous qualities is that they improve the developer experience: Developers can spend more time coding and/or more time learning, increasing their skills, relevance and marketability.