Today was the opening keynote of TechEd 2013 and despite some nothing new pre-leaks - there were some substantial announcements and takeaways - I will concentrate on my top three takeaways - probably more later during the week.

It is a little more than a 100 days since Vishal Sikka has taken over the reins of all product development - and he is wasting no time to get things done, even if this is hard and potentially unpopular decisions.

This is the first time I have heard an SAP executive publicly acknowledging the littered system landscape that SAP has accumulated through the years both internally and through acquisition - nothing says it better than the picture Sikka drew during the keynote: 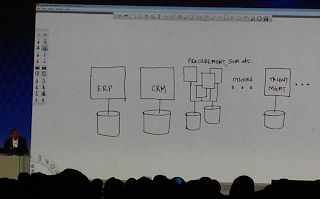 Name your systems - it is a lot of parallel and redundant code and functionality - so let's look at the SAP to-be architecture: 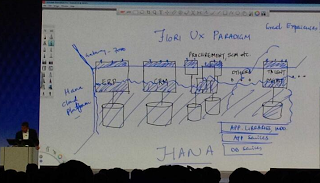 So not surprisingly we will see the following in the near and far future from SAP:

Takeaway #2 - SAP gets serious on Analytics - partners with SaaS

This is probably one of the best mutually acknowledging each other leadership partnership I have seen in a long time. SAP acknowledges SAS leadership as the analytical tool of choice of data scientists and SAS acknowledges that HANA is a mature database platform to deploy models to and run analytical application on.

At the same time SAP keeps its own ambitions in the analytics space - notably after the KXEN acquisition - so we witness another of the recently more and more popular co-opetition partnerships. These can go well - but can also be problematic.

But the prize is clear - if SAP manages to make HANA the database of choice for model building by the data scientists using SAS - then it can become the de-facto analytical database of choice for the enterprise. A (free?) bundle of SAS with Hana One - maybe on a larger AWS instance, say 10 GB of RAM - would not hurt that process.

With the announcement of version 3.0 of the SAP Mobile Platform SAP makes a key step towards fixing it challenged mobile track record. Out is much of the proprietary and all clunky Sybase pieces - and in is a standards based, open sourced mobile development platform. This will help capture both talent and capacity for new mobile applications. More to come, stay tuned, not my colleagues Chris Marsh's quote in the press release here.

A good keynote with nice touches like an intro by Alan Kay, a reference to Gutenberg, a leitmotiv in reference to Bert Engelbert's ABC model applied to SAP (we will see how hifi that is in a few quarters) and three key takeaways. It will be a huge challenge for SAP to move to the to be landscape - and many details will have to follow - but the urgency is seen and noticed by the shrinking on premise apps, as Sikka stated and my colleague Dennis Howlett just report here.
And oh yes - tons of improvements around HANA, but that wasn't a surprise (anymore).
2013 (C) Holger Mueller - All Rights Reserved