In my last blog "IBM Blockchain as a Service and Hyperledger Fabric forge a new path", I mentioned how the language of blockchain technology is shifting.  Even the labels themselves are still fluid.  Debates rage over whether IBM and R3 should call their solutions “blockchains”.  For a year or two now, many writers have preferred Distributed Ledger Technologies, yet the increasingly dominant private blockchains aren’t very distributed at all.  So the thoughtful Dave Birch for one prefers to call them “shared” ledgers.  I like that, but who knows what terms will prevail? I do know that words matter and we should watch how they're used.

The characteristics of third generation DLTs are shifting markedly, and the blockchain vernacular is losing some of its mystique.  Decentralisation distinguished the first generation blockchain, and some still say it’s essential. But let’s remember that the public blockchains don’t actually produce decentralisation; they are designed with decentralization as a starting point.  Nakamoto rejected financial institutions, and the Bitcoin blockchain was designed to handle e-cash with no central authority. Yet nothing in the original design indicated that decentralisation could fit all types of business, nor that the blockchain could decentralise anything other than e-cash.

Immutability is another word that’s becoming a bit stale.  In my nearly twenty years experience in cybersecurity prior to blockchain, I don’t recall “immutability” ever being expressed as a requirement.  The idea seems peculiar to blockchain.  And it’s not actually a requirement so much as a means to an end.  The real need in the Bitcoin blockchain is to have a community monitor all transactions and detect Double Spends, which they do by committing all agreed transactions to a permanent record.  Immutability is a result of the massive redundancy of the network. Yet there are many ways to achieve satisfactory permanence in a file system, most of which had been immutable enough until blockchain came along.

But if just one word was to go from blockchain discourse, I’d vote off “trust”.  I’ve long thought that trust only confuses the field of identity management, but trust is truly the phlogiston* of blockchain.  One of the worst misrepresentations of the first generation blockchain was as the “Trust Machine”, as if trust somehow gets mined from the network and imparted on its outputs.

No, blockchain was designed to enable parties who don’t know each other and who trust no one, to nevertheless exchange real irrefutable value.

Security is generally based on a triad of Technology, People and Process. When we say that blockchain is “trustless”, we mean the system is operationally secure without relying on people or process.  And that’s a rare feat, even if it’s strictly limited to purely digital assets. 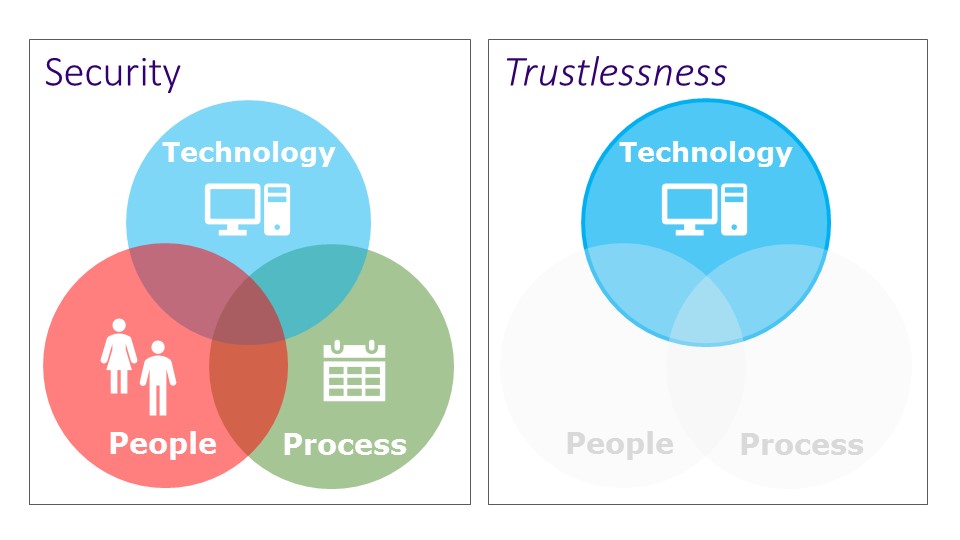 Blockchain enables people to do an important thing without trust.  With Bitcoin, senders and receivers walk away from their transactions without any new conviction in one another.  Strangers before, and strangers after.

As Distributed (or shared) Ledger Technologies continue to evolve, I can see “trust” fading away.  Expectations of DLTs are becoming more complex and more sophisticated than the utopian beginnings of blockchain and Bitcoin, as serious applications emerge in trade, logistics, finance, and supply chain.  The words we use for these things need to be precise.

In a forthcoming Constellation Research report, I will be analysing how the blockchain’s ideals of immutability, transparency and consensus are being refined and re-engineered in fresh DLTs for complex real world applications.

* FOOTNOTE Before modern chemistry, fire was explained as the result of a special essence called phlogiston, present in combustible materials being released, leaving behind depleted and lifeless ash.

blockchain, DLT, trust, semantics
Stay up to date with the latest disruptive technology.