Let’s say you’re an account executive and you have an urgent customer issue you need to resolve. A typical process for this common scenario may involve email messages, the customer support ticket, the customer record (CRM), information about inventory (ERP) and prices, and a few other tools like chat, video conferencing and more. How do you bring all that information together to combine into a single story? How do you share that with the people that need to be involved to resolve the issue? How do you make sure each person involved only has access to the part of the scenario that's related to them? How do you record the entire workflow so you can leverage the information again later?

It’s such a typical scenario but one that does not have a very efficient or effective solution. Today there is email, social networks, screenshots, web-conferencing, task management and a long list of other tools, but none allow teams to easily collaborate while at the same time ensuring people only have access to their own part of the workflow.

If you’ve followed my work over the last few years you’ve inevitably heard me talk about collaborative digital canvases. Well Microsoft may have just built one, and perhaps introduced a new way of collaborating.

UPDATE 11:00am - see the storyline of my tweets about GigJam as they occurred during the keynote demo.

Gigjam is an application that runs on your PC or mobile device. The owner of the “gig” started with a blank canvas, then adds containers to each of the pieces of information required for the given scenario. In the screenshot below, on the left there is container showing customer records from Microsoft Dynamics (it could be from any CRM system, ex: Salesforce) and on the right inventory information from SAP. These two applications are linked together based on the customer name, so as the CRM record on the left changes, the right side updates accordingly. The link was created simply by clicking the blue link button at the bottom. No coding was required and no field mapping or SQL queries needed to be written. 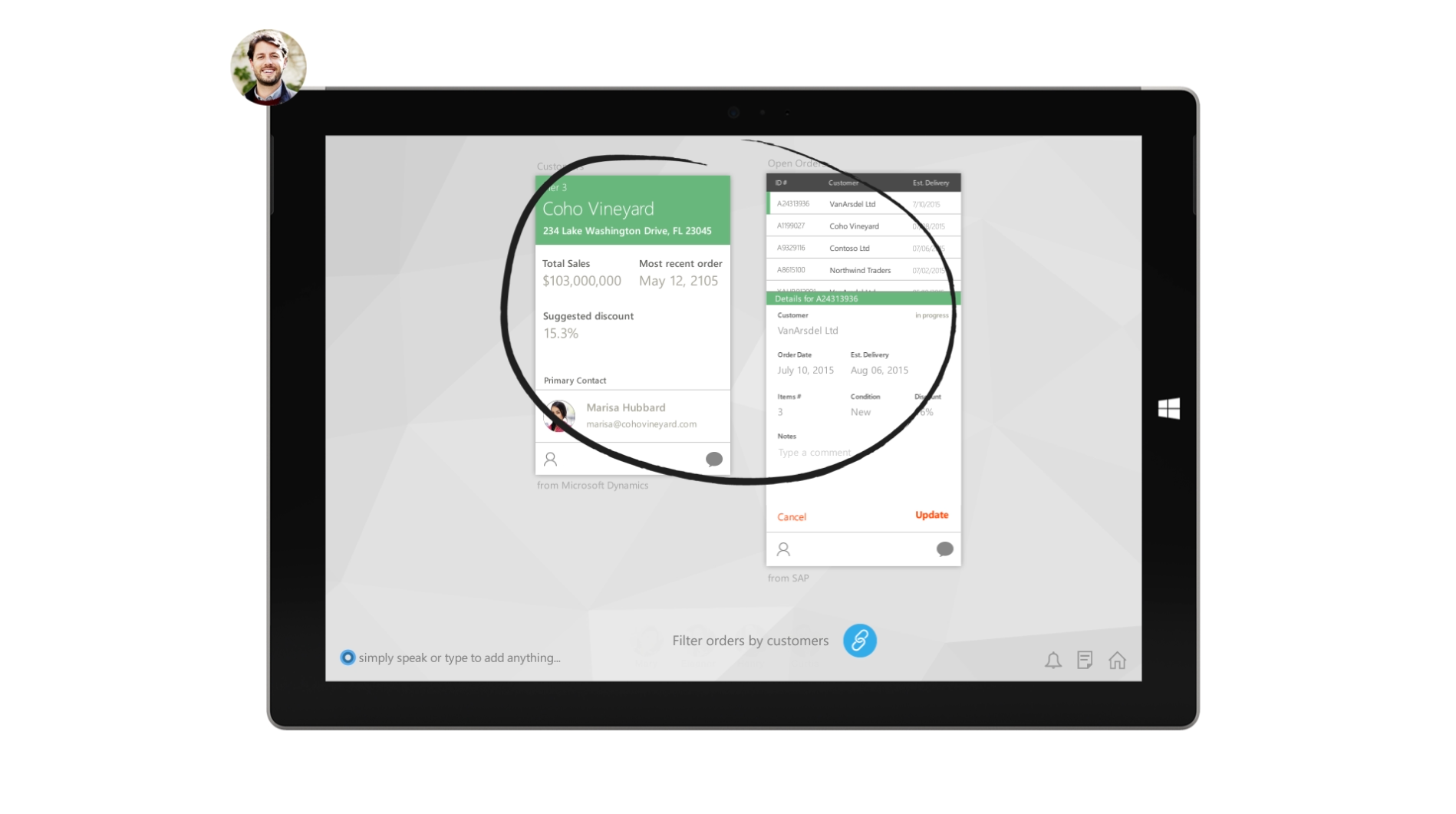 Ok, neat. but not revolutionary, as there are many ways to create composite applications today. But now is when the really cool stuff begins.

To share the information the owner of the gig simply needs to circle the components they want to share, select the recipients and choose the level of access they want them to have. If there are specific elements they don’t want shared, they can simply cross them out. This can be information or even UI elements like scroll bars. Read that again, to hide specific information, you simply cross it out before sharing. No complex filtering or setting up multiples sets of permissions. 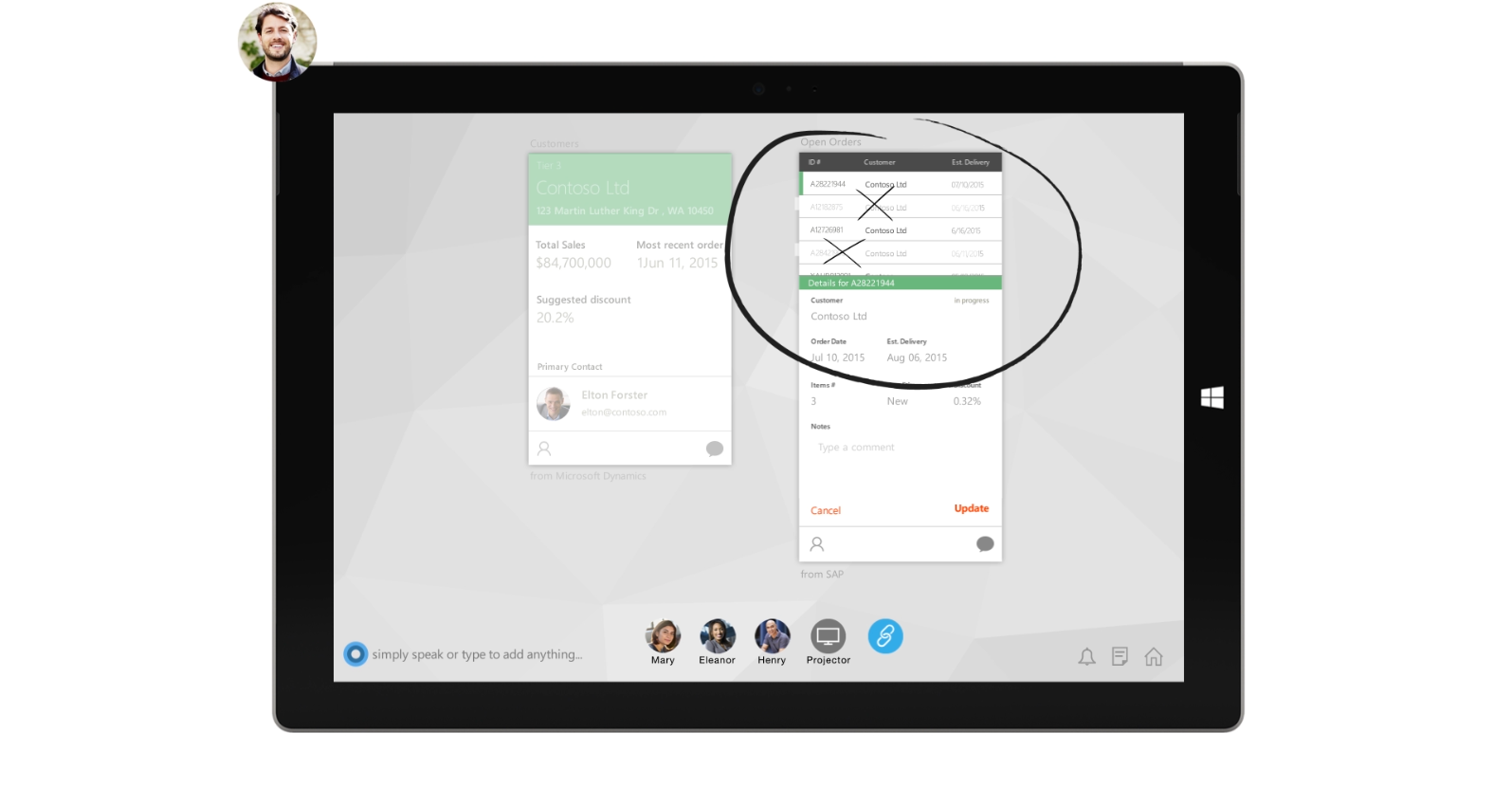 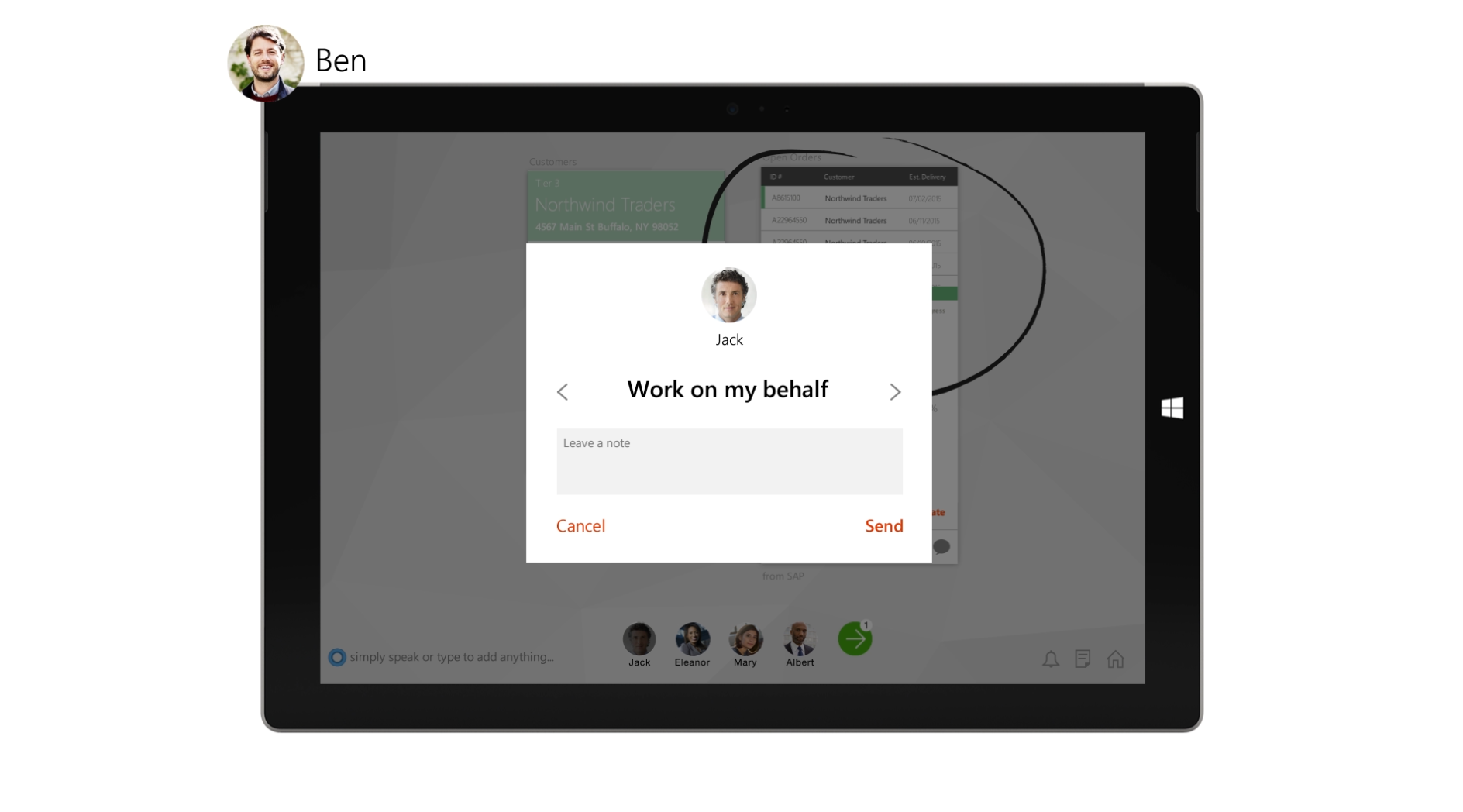 Imagine sharing a spreadsheet with a few people, but each only sees the exact cells you want them to update. Or a presentation where instead of sending different slides to each person for updates, you send each of them a task in a gig where they only see the select slides you want them to access.

In the customer support scenario I mentioned above, the owner of the gig may send a request to someone in Logistics to update the inventory, one to Finance to provide a price discount, and yet another to Support to reply back to the customer and resolve the support ticket. Three different people, three different tasks, but all created and shared from a single location. The owner of the gig can even play back the work the participants performed, allowing them to watch every step of the solution. For example, they can watch Logistics update the ERP record, Finance update the price, and Support change the status of the ticket.

The interesting thing about Gigjam is it requires no changes to the applications themselves. Microsoft basically wraps a presentation layer around each application, whether it’s Dynamics, SAP, ZenDesk, Asana, Box, FreshBooks, you name it. That application can then be displayed to each member of the gig.

Of course the linking of applications does not just magically happen. Microsoft has coded a series of links today, such as the Dynamics to SAP one in the example above. Additional links can be created, similar to the way people create events in tools like IFTTT and Zapier. Presumably 3rd party vendors will be able to add links to Gigjam, making it simple for their products to participate in workflows.

Evolving The Way We Get Work Done

I've tested, reviewed and provided advice on hundreds of collaboration products, and I fear what I’ve written above may not do justice to explaining how powerful I think Gigjam could be. It reminds me a lot of the early days of Lotus Notes, where we would demo to people and they would not understand what it really was. Then after the second, third or maybe fourth demo something would click and you’d see their eyes light up as they started to imagine what they could do with it. I think Gigjam is similar. It’s still early days. This is not a product that’s shipping today, and Microsoft will be putting out a lot more information about it as it matures.

While Microsoft is showing Gigjam as a collaboration tool that enables teams to divvy up work to solve business workflows, I can actually see this as a personal productivity tool as well. When I first tested it (under NDA prior to the announcement) I immediately wanted to create myself a few “canvases” where I could connect the various applications I use throughout my day. I’d love to stop switching back and forth between tools and losing context. Gigjam may be the answer.

By the way, Gigjam’s name comes from the “gig-economy” trend, where people perform small jobs for different clients. Examples you may know of include TaskRabbit, Upwork (formerly oDesk) or Fiverr. This is similar, where you pull in your colleagues to help you complete a task.

Over the last year or so, we’ve seen some major advancements in Microsoft's collaboration portfolio. They are not resting on their laurels and just releasing new versions of their existing products, but have instead pushed forward with tools like Delve (visual search and discovery) and Sway (story telling, think nextgen PowerPoint). Acquired best-of-breed mobile applications Accompli (email), Sunrise (calendar) and Wunderlist (tasks). Delivered Surface Hub, a stunning, interactive digital white board and conferencing screen. Microsoft is also making projects from their Research Garage and Fuse Labs such as Tossup (scheduling), InstaNote (meeting minutes), Xim (photo sharing) and Socl (social content sharing) available for public testing, and in the process are gathering critical information that helps them develop their official products.

Project Gigjam is the latest in the serious of moves that Microsoft is making as they focus on personal and team productivity.  Customers, partners and competitors should pay close attention as the concepts in Gigjam could play a large part in shaping the future of way people work.