In the latest course of a 15 month security feast, BlackBerry has announced it is acquiring mobile device management (MDM) provider Good Technology. The deal is said to be definitive, for US$425 million in cash.

As BlackBerry boldly re-positions itself as a managed service play in the Internet of Things, adding an established MDM capability to its portfolio will bolster its claim -- which still surprises many -- to be handset neutral. But the Good buy is much more than that. It has to be seen in the context of John Chen's drive for cross-sector security and privacy infrastructure for the IoT.

As I reported from the recent BlackBerry Security Summit in New York, the company has knitted together a comprehensive IoT security fabric. Look at how they paint their security platform: 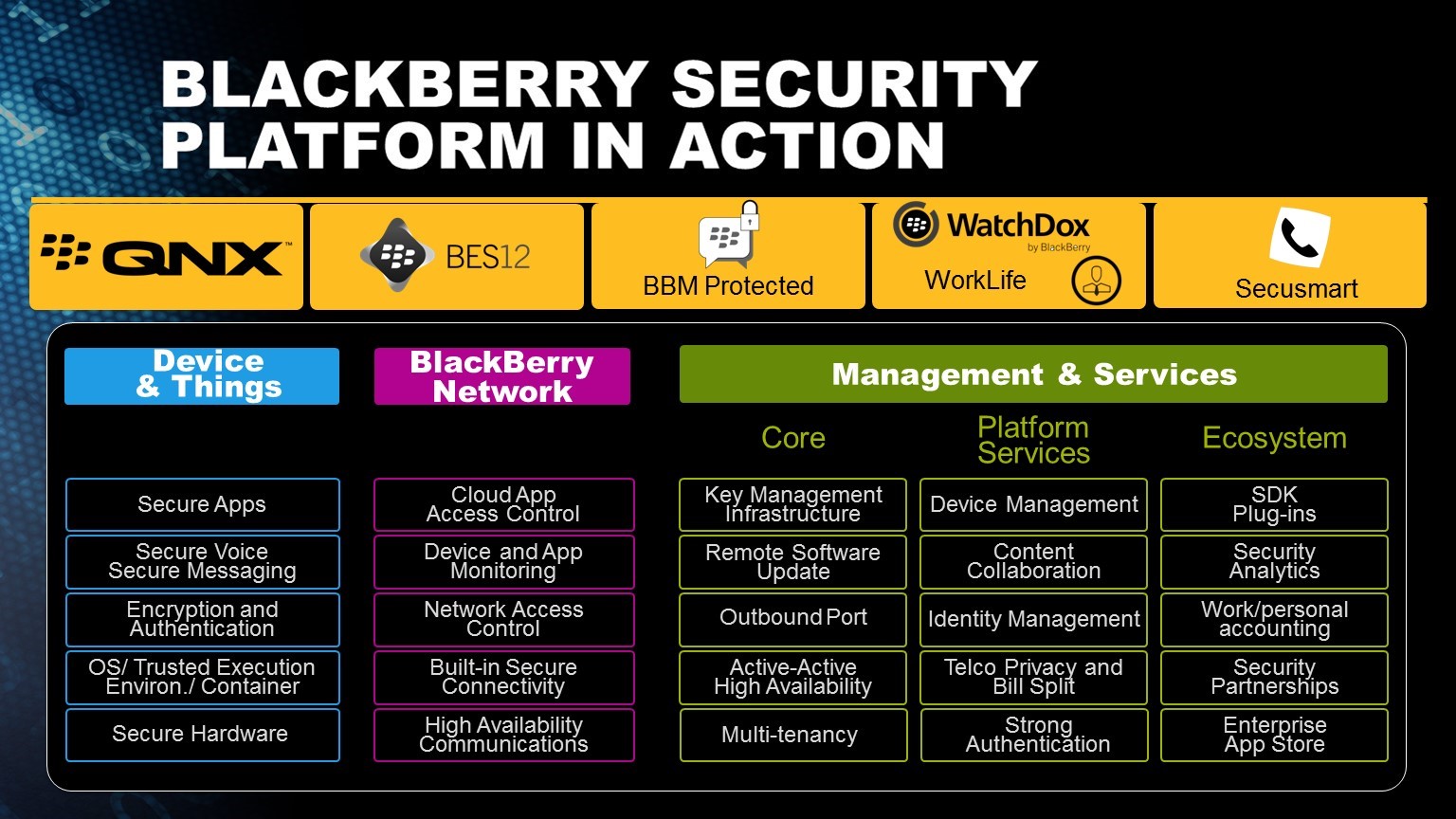 And see how Good will slip neatly into the Platform Services column.

So this is the latest in what is now a $575 million investment in just over a year in non-organic security growth (following purchases of Secusmart, Watchdox, Movirtu and Athoc).

Good will bring complementary capabilities and technologies to BlackBerry, including secure applications and containerization that protects end user privacy. With Good, BlackBerry will expand its ability to offer cross-platform EMM solutions that are critical in a world with varying deployment models such as bring-your-own-device (BYOD); corporate owned, personally enabled (COPE); as well as environments with multiple user interfaces and operating systems. Good has expertise in multi-OS management with 64 percent of activations from iOS devices, followed by a broad Android and Windows customer base.(1) This experience combined with BlackBerry's strength in BlackBerry 10 and Android management - including Samsung KNOX-enabled devices - will provide customers with increased choice for securely deploying any leading operating system in their organization.

The strategic acquisition of Good Technology will also give the Identity-as-a-Service sector a big kick. IDaaS is become a crowded space with at least ten vendors (CA, Centrify, IBM, Microsoft, Okta, OneLogin, Ping, Salepoint, Salesforce, VMware) competing strongly around a pretty well settled set of features and functions. BlackBerry themselves launched an IDaaS a few months ago. At the Security Summit, I asked their COO Marty Beard what is going to distinguishe their offering in such a tight market, and he said, simply, mobility. Presto!

But IDaaS is set to pivot. We all know that mobility is now the locus of security , and we've seen VMware parlay its AirWatch investment into a competitive new cloud identity service. This must be more than a catch-up play with so many entrenched IDaaS vendors.

Here's the thing. I foresee identity actually disappearing from the user experience, which more and more will just be about the apps. I discussed this development in a really fun "Identity Innovators" video interview recorded with Ping at the recent Cloud Identity Summit. For identity to become seamless with the mobile application UX, we need two things. Firstly, federation protocols so that different pieces of software can hand over attributes and authentication signals to one another, and these are all in place now. But secondly we also need fully automated mobile device management as a service, and that's where Good truly fits with the growing BlackBerry platform.

Now stay tuned for new research coming soon via Constellation on the Internet of Things, identity, privacy and software reliability.

See also The State of Identity Management in 2015.