During the Mobile World Congress in Barcelona, held from 26thof February till 1st of March at the Fira. I had the chance to meet with a number of SAP executives and get some important takeaways from the briefings, worth of a blog post of media collected:

Prefer to watch – here is my event video …
Here is the 1 slide condensation (if the slide doesn't show up, check here):
Event Takeaways - SAP at MWC 2018 from Holger Mueller

Want to read on? Here you go (trying the Twitter thread format - let me know what you think of it): 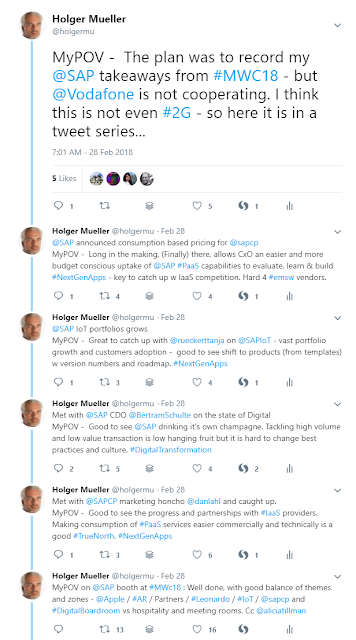 A good point in time to check-in where SAP stands. Consumption based pricing is likely the most impactful announcement, giving CxOs better options to experiment, evaluate and operate next generation applications. The transformation of the SAP IoT portfolio, moving from templates, APIs and examples to separate products is equally positive.
On the concern side - I was not so sure if SAP got the marketing $s back from a large booth at MWC. Apart from the Telco and Comms industry vendors - MWC is not a mainstream IT event. But certainly good to be at the party for SAP.
Overall good to catch up with SAP in many of its technology offerings. Sapphire looms large - only 3 monhts till the gathering in the Florida swamps.

cloud, internet of things, mobile, mwc18
Stay up to date with the latest disruptive technology.