One of the presentations I look most forward to on a yearly level are KPCB's Mary Meeker's 'State of the Internet' presentations. These days she releases them as the 1st speaker of the AllThingsD conference - and thankfully they are available on slideshare immediately afterwards. Somehow Mary manages to always have some interesting trends up the sleeve, that at least I have not seen at all seen or not seen with that relevance... so why not check out what this year's presentation held for the enterprise?

The Internet is the platform

Remember the times when professionals were even saying, that in the emerging countries to a certain point and in the third world for sure - there would be internet access problems? Well Google will take care of some of that now - but already today the internet coverage and usage is such that a global enterprise app needs to be not only browser based, but make sure that it understands the nuances of internet access in key markets. And there lies the challenge - though the hope lies on the shoulders of HTML5 - different bandwidth considerations have to be taken care of. 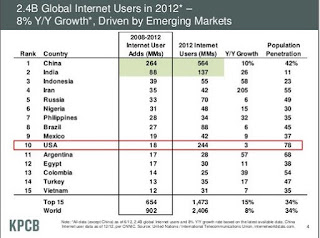 A lot has been written on the data explosion, but it's clear that any enterprise vendor needs to have a bigdata strategy. Too much relevant information is available now that it can be ignored in enterprise processes. And while the externally facing processes have been in the driver seat in the past, bigdata is relevant for internal processes, too. Think of the explosion of picture, voice and video data - this will not stop at the enterprise gates, enterprise apps will enable relevant usage of media for business processes and the resulting data needs to be stored, accessed and analyzed later. 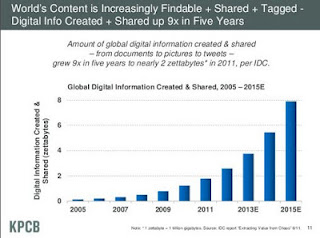 One of the emerging trends is the sharing economy - and it manifests itself in consumer apps like snapchat.com - but when consumers start to share resources, it will not be or long until this trend will be a differentiator for the back-end processes of enterprises. At the end of the day it's the apps at these enterprises that enable the economy, so if sharing starts as a business trend, it will raise all kind of issues towards a more rigid, purchase-only minded business automation app. 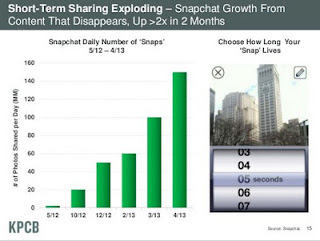 Mobile First is not a choice but a Must

No surprise that mobile internet access is booming, but interesting to see inflection points of mobile internet usage ecclipsing all other usage in countries like China and South Korea. And with tablet shipments surpassing desktop and notebook PC shipments, it's key to design for flexible form factors. 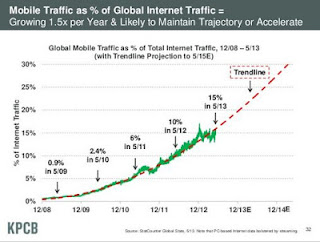 With miniaturization of devices progressing, it's clear that smart devices will permeate form and become wearable, driveable, flyable, scanable etc. It's early days, and enterprises are still figuring out how to eg track high value equipment via RFID, but the whole social and collaborative aspect of business work will change with wearable devices. Why even go to a video conference room, or skype, if your communicator device can be with you all the time. Why spend time on expensive printing, if a simple QR code can suffice? And QR codes solve a problem that isn't solved on most wearable and smart devices, information retrival. The QR code avoids that, brings the user to the wanted information - and avoids distractions as served by a search engine or other means of information retrival. 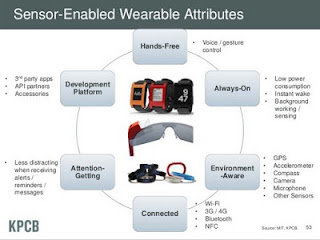 There have been a lot of concerns around a market that is tough to enter, copy cat competitors, IP issues etc have been raised in the past - but Meeker's presentation makes clear that China is a modern market, and innovation really happens there. If China wouldn't be such a huge market - we would see much more of the innovation in the US.
Just think of the Chinese innovations presented coming from a small market like e.g. Belgium - they all would be exported and available in the US already. But given some degree of North American xenophobia vs China and the attractiveness of the home market for Chinese startups - we haven't seen much of them yet here. For instance I knew Alibaba, but that Alibaba merchandise shipments have passed the combined Amazon and eBay volumen - was a surprise. Same day delivery, taxi apps, the social site Weibo - are all key trends that any enterprise vendor has to look into. And China will soon pass Europe in its share of the world's GDP - an impressive chart: 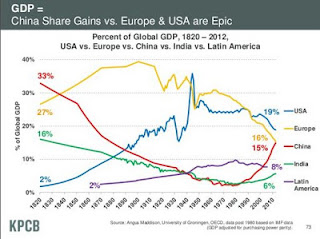 We have seen a lot of Freemium apps in the B2C space - but not in the enterprise apps space. Somehow the thinking is - as you pay for the license - you don't get any advertisement / promotion coming your way. But seeing Meeker's slides on the market - why not offer a mild form of advertisement in a enterprise app? Especially for the occasional user of self services apps - the advertisement may not even be noticed - but may lead to a free usage of the enterprise app. It will take some B2C entrepreneurs to experiment here - but I think there is an opportunity here. 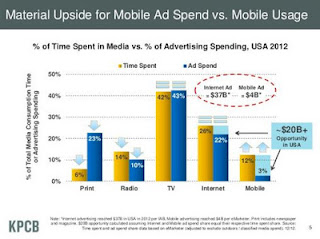 High tech stands on immigrants shoulders, 60% of the Top 25 tech companies were founded by 1st and 2nd generation Americans - and immigration is needed to close the talent gap - as e.g. IBM, Intel, Microsoft, Oracle and Qualcomm have over 10000 openings in the US. With a lot of innovation still coming form the US, e.g. Meeker pointed out that 80+% of in top internet properties come from the US, but 80+% of traffic comes from outside the US - it remains key for enterprise software vendors to recruit talent from across the world. It's cheaper having two Brazilians working for you in e.g. Sunnyvale and getting the Brazilian verison done right, than opening an operation in Brazil. 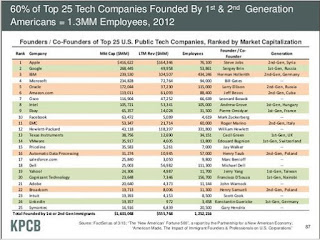 Gold in the Appendix

Some more interesting findings from an enterprise perspective were in the appendix. E.g. the IBM survey see technology factors rising to the #2 concerns for CEOs, they were #3 in 2008 and 2006, and #4 in 2004. This is a huge opprtunity for enterprise vendors to address and leverage for their future offerings - but they need to keep the reduction of risk and the focus on a positive business impact in mind. 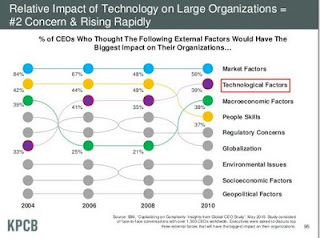 Re-Imagination is live and well according to Meeker, but note that most examples come from the B2C area - with the exception of MakerBits 3D printing and eLance and oDesk flexible employment (did you know WaaS is Workforce as a Service?). The question is - where is re-imagination of enterprise apps?

I can only immagine what compromise Meeker's must have undergone to take her 90 slide presentation into 60 minutes presentation - but here are a few trends I would have liked to see make the deck:

As an enterprise vendor today you need to build for the larger, more global internet, going mobile (and tablet) first, source your talent globally, have a big data architecture and think through your China strategy. Make sure your user interfaces are highly transportable and independent of form factors, as we do not know where the xx-able revolution will lead us for the consumption of enterprise services.

And look at the consumer space, where newer trends like project based work, sharing resources etc will soon have an impact on the future enterprise apps.