The AWS reinvent conference is in full swing in Las Vegas, attended by about 9000 clouderati, so it's time to look at the key statements and our takeaways of day 1 are.

The usual conference statistics first - almost 9000 attendees from 97 countries, evenly split across startups, SMBs, and large enterprises. reinvent is an educational event with more than 175 sessions, often run by customers and partners. And with 196 exhibitors this is a proof of a thriving AWS ecosystem at hand.

AWS has come a long way

Andy Jassy, SVP of AWS, kicked off with walking the audience through what AWS has achieved in the little more than 10 years it is around - available for customers for about 7 and a half years with the first launch of S3 (it was March 14th 2006). Jassy - in our view rightfully - can be proud about the breadth and depth of the offering. 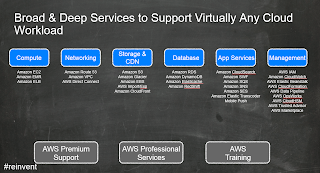 Comparing my notes with November 2012 reinvent though, I was surprised to see that AWS still has the 9 data centers like back then - but has added one more availability zone (now 26) and and 4 Edge locations (now 42). While competitors are adding data centers (e.g. Oracle this week) or moving data centers (e.g. IBM moving to SoftLayer data centers) - the AWS topology seems to be stable - a sign of the maturity of coverage the division has achieved.

And AWS always likes to talk about how much capacity it adds on a daily basis and what size of Amazon business that would support. And that KPI has moved from an Amazon 5.2B business to an Amazon 7B business in 2013, a more than 30% increase year over year.

Customer growth is equally impressive and Jassy not surprisingly pointed out the progress in the public sector space. AWS never gets tired to stress that it cares for security and given the enhanced security requirements of the public sector that AWS fulfills - all customers benefit from the progress made there. More on that below.

The AWS marketplace - only shortly introduced - seems to be doing very well these days - with the number of products up 71% and 1100 products listed. A good proof point of a mature platform.

But then with the AWS business not publishing any numbers overall and for the marketplace in specific - it all remains speculation how much revenue flows through this market place. This is an area the division is well advised to think about publishing revenue numbers. Or vague indications - like the e.g. the marketplace is as big as Amazon was in year so and so.

And of course the fear of the cloud is still present for many enterprises today - and with that remains a key concern that AWS is addressing. On the one side it's good to see Jassy acknowledging security as concern number 1 for AWS, on the flip side it would be good to see the market maturing and graduating from that fear. 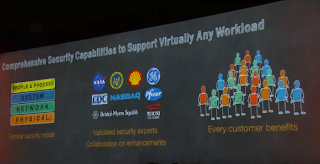 But that's not AWS fault - and AWS works on making it less of a concern with the new AWS Cloudtrail feature that was announced today. And Cloudtrail gives customers insight into what is happening in their AWS instance. The good news is how AWS re-uses it's own technology - the log files get dumped into S3. Equally AWS gets kudos from us to allow partners to analyze the log - and 5 of them (Splunk among them) do support this.

As with any new service it does not cover everything and is not available everywhere. AWS Cloudtrail is no exception with only 8 services support (key ones though like EC2, EBS and RDS) and 2 regions live (US East and West (Oregon)).

Our largest concern in this early stage is, that logs will only be available around 15 minutes after the event thats logged. That is certainly fine for most events - but for some critical ones a lot of damage and harm can be done during that time. We think AWS has and will address this - maybe sooner than later.

Next Jassy gave some insight on what is the dynamics - he called it a flywheel - behind the numerous price reductions that has AWS has seen. And the wheel starts with external infrastructure innovation that drives to lower infrastructure costs, that allow AWS to reduce prices, that makes AWS attractive to more customers, which then use AWS more, that then needs to buy more infrastructure, enabling economies of scale and the whole process repeats.

And we certainly believe in the economies of scale, especially after fellow analyst colleagues from Gartner have published, that AWS has more than 5 times the compute capacity of the competition combined.

Along the same lines Jassy repeated that famous Bezos quote that he yet has to meet the customer that wants to pay more. And according to Jassy AWS listens to customers but also does not want them to spend money unnecessarily - so AWS monitors system usage and has so far told customer over 700k times through its trusted advisor program that they can save money by stopping not used - but paid services. The savings the customer have combined achieved - following the advice - are 140M. Truly unique, impressive and we have to trust AWS that the number is valid.

In this interesting part of the keynote - Jassy broke a lance for employees at large corporations. Basically he said that these employees want to be and are innovative, too - but an outdated infrastructure holds them back. By using cloud infrastructure - even large corporations can become dynamic again. It can be ramped up quickly, with little investment and can disappear equally quickly when no longer needed. The cloud brings agility to the large enterprise is the new tagline. And these can now try innovative things quickly - and fail fast - with little investment.

All that of course gets more relevant with more disruptions happening to traditional businesses from cloud businesses - `the examples being (of course all AWS customers) airbnb, spotifiy, Dropbox, Instagram and Uber).

Next up was Jeff Smith, the CEO of Australian finance giant Suncorp, giving an example for such an approach.

Not sure why - but Jassy felt he needed to remind the audience of the basic cloud benefits. And that these - not surprisingly - cannot be leveraged in a private cloud.

But then Jassy acknowledged, that enterprises will not move overnight from on premise to the cloud. The world isn't black and white - but grey - and AWS helps customers to bridge the gap between on premise and the AWS public cloud.

Where AWS differentiates themselves from the competition (AWS calls them somewhat cute the old guard) is that AWS sees the on premise part ultimately close to 10% of overall load. The old guard in contrast sees public cloud only as 25% of the future load in an enterprise.

It's a nice way to differentiate - but we think ultimately customers will do what it's best - so probably the old guard pacman is a temporary state of the overall cloud vs on premise load balancing.

And now something completely different - VDI

Not a small surprise that AWS now wants to be in the virtual desktop business. Which is a business that has never really taken off in our view - despite a lot of promise. But maybe 2013 is the fall of VDI afterall with VMWare acquiring Desktone and now AWS launching its offering.

Not surprisingly Amazon right out of the gate says, that it will take it's stab from another direction, from the public cloud. So all the cloud benefits of being fully managed, being a pay as you go service, no CAPEX required, are given. And AWS can provide the license or it can be BYOL - which is a good start. Moreover the integration with Microsoft Active Directory makes it easy to deploy as users can keep their credentials. And Amazon WorkSpaces supports PCs and Macs as well as iOS and Android tablets. Lastly AWS claims that by avoiding usual on premise cost such as sever hardware, storage and administration - it can provide VDI at half the cost than in premise VDI can be deployed.

Finally Jassy also unveiled the pricing - depending on hardware chosen and need for software - a VDI user will cost between $35 and $75 a month. A good price point, that certainly isn't - as we know AWS - its last one.

We had the chance to speak with executives from VMware in the aftermath of the keynote and they said that they can be equally - if not more - attractive on price - and with Desktone have a mature product and significant more functionality than Amazon WorkSpaces. Certainly a valid point. But never underestimate AWS as a competitor. We asked from some reaction by the other incumbent, Citrix - but haven't heard back yet.

Cloud strategies as seen by AWS

Next Jassy went over six different cloud deployment scenarios - as AWS sees them. The six are as folllows...

AWS has taken care of the  mobile market for a while, with offering out of the box mobile capabilities for developers who build mobile applications. And now AWS wants to help with tackling a key problem - the rendering of highly interactive and compute intensive applications across devices, as seen in gaming, engineering, events etc. with a new service called Amazon Appstream.

The good news is, that AWS does have the computing resources in the cloud to make this happen - and then the connections to the endpoints where these apps will be consumed. So it was an almost natural step for AWS to provide the streaming support of compute intensive apps.

Interesting enough, AWS developed its own protocol for the streaming with STX - not sure if this was necessary - look forward to learn more about it from AWS.

Next up was Tradeworx President Arzhang Kamarei - the company built software for the SEC. The most interesting takeaway was that with only 5 FTE Tradeworx manages to monitor 5% of the stock market.

And finally Keven Baillie of Atomic Fiction showed how AWS can help create CGI animations - a perfect example for an elastic showcase. Huge compute demand during production and rendering and then close to nothing when Atomic Fiction puts the whole project into... AWS Glacier. And the content and demo shown satisfied the geeky part of the audience, and probably the developer side in the audience, too - which did not have too much from the Jassy keynote .... which - no surprise - was all about the enterprise.

A good start of reinvent for AWS. Significant three product announcements - two that add value for two key areas for AWS - security and mobile. And a new market entry, for the first time AWS will reach end users directly - with Amazon WorkPlaces.

What was interesting to note is how AWS uses its streaming dominance for further product innovation. This maybe only high level - but if you stream video content (of Netflix) to the volume of one third of US internet traffic to a number of different devices and form factors - then rendering game and app information for the same devices and streaming it (Amazon Appstream) is not a completely new challenge. When you than consider that running a user's desktop is a less challenging compute load than rendering high resolution apps and games - and then stream that - then the entry into VDI with Amazon Workspaces - is not such a big step either. And both server compute loads for Appstream and Workspaces are ... highly elastic. And the delivery of streams is something AWS has already mastered.

A collection of key tweets from the keynote can be found in Storify here.